Tyler Herro's future with the Miami Heat can be as great as he wants it to be. Here is what makes the young rookie a future star in the NBA. 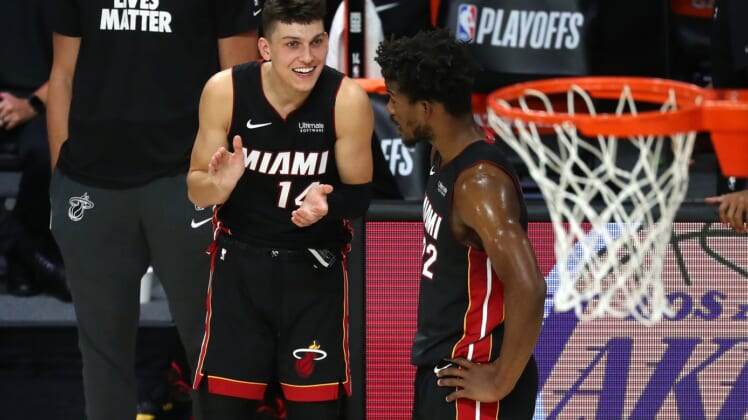 Miami Heat rookie guard Tyler Herro has a bright future in the NBA. Never one to shy away from big moments, Herro is already showing the ability to step up in the clutch and deliver for the Heat.

Whether it’s a game-saving three against the Philadelphia 76ers or carrying his team in the final seconds of Game 4 against the Milwaukee Bucks, Herro has shown the makings of a future NBA star.

There’s more to it than just the eye test for Herro. The statistics back up his touted rookie season. Specifically, during these 2020 NBA Playoffs. Through the first nine games of the NBA Playoffs, head coach Erik Spoelstra is allowing the offense to run through Herro in the fourth quarter. Considering he is a rookie, that is a major point when it comes to his development as a player.

Here are the two main reasons why Herro has gained trust from his teammates and head coach Erik Spoelstra.

Through nine playoff games, the former Kentucky Wildcat star has four clutch three-pointers, which is the most of any rookie in the last century. The last rookie to sink four clutch threes during any postseason was Houston Rockets guard Matt Maloney in 1997.

Outside of previous rookie success, Herro is having a great postseason during clutch time among all players. He is tied for sixth place for three-pointers made per game, behind the likes of Luka Doncic, Jamal Murray and Damian Lillard. When it comes to total three-pointers made, he is ranked second behind Murray with four per outing.

The NBA’s hiatus due to COVID-19 allowed players to practice and train as if it were the offseason. It is clear Herro has been working on his game and began to process the game slower. At only 20 years old, he is showing what he is capable of doing when it comes down to the final seconds of a game. This is a bright spot for Herro’s future and he will only get better from here.

Playmaking has been a drastic improvement

Along with his prolific shooting, Herro’s play-making abilities are one of the main reasons for his uptick in minutes during the NBA Playoffs. During the regular season, it was a work in progress for the rookie as he was getting his feet wet in the NBA. There can be an argument made that no rookie has improved more in one area as Tyler Herro has with his play-making and ball handling.

Coming out of the University of Kentucky, Herro was only known as a shooter. In fact, many thought Herro’s future would be a good shooter off the bench. Here are some of his weaknesses in a scouting report from NBADraft.net.

While it was a question at the start of the season, he has drastically improved in this facet of the game. A number of times in the NBA Playoffs, Herro has driven to the rim resulting in a crafty finish. He has limited his turnovers and is only averaging 1.6 turnovers per game thus far.

Confidence is a trait that Herro has never had a problem with. Whether his shots are falling or not, he continues to shoot and be confident in his game. One of his underrated qualities has been his control of the ball in clutch situations. The fact that Erik Spoelstra, one of the best coaches in the NBA, has the confidence to run the ball through a rookie in crucial playoff games is meaningful.

Erik Spoelstra and every one of Herro’s teammates has confidence in him. When listening to his teammates rave about him, it is clear they know the type of player he can become. Perhaps, his ceiling is as high as he wants to it be.

The stars aligned for Miami and Herro the day he was drafted. His wants to be great and Miami’s culture is a match made in heaven. When the Heat acquired star forward Jimmy Butler in a sign-and-trade from the Philadelphia 76ers, it only made the fit better. Butler expects the best out of everyone and has taken Herro under his wing.

While he might only be a rookie, Herro has shown that he is not an ordinary rookie. He has a future star look written all over him.