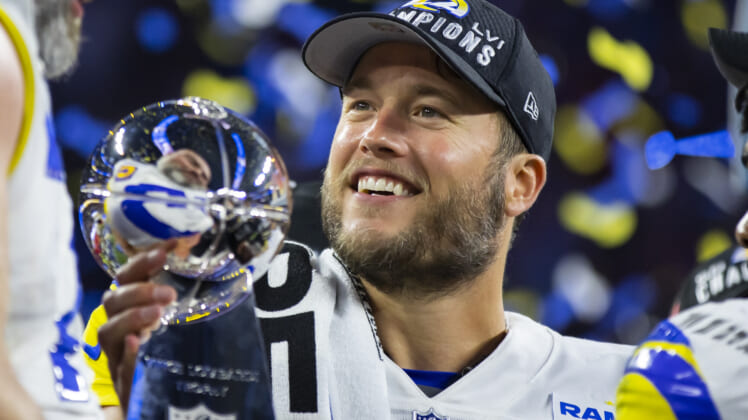 After a glorious season that ended by adding a Lombardi trophy to their showcase, the Los Angeles Rams are happy to hand Matthew Stafford a new contract.

On Saturday afternoon, the Rams announced that they have agreed to extend their Super Bowl quarterback with a four-year, $160 million extension, $135M of which is guaranteed. This new contract places Stafford fifth among all QBs in annual salary.

Stafford’s new contract keeps him in L.A. through 2026 and after his best season yet, there’s likely no other place he’d rather be.

Before the Los Angeles Rams swung for the fences for Matthew Stafford, they completed another blockbuster trade, landing Jalen Ramsey in 2019. It helped form a phenomenal defense, but offensively they felt a change was needed. They eventually determined Jared Goff wasn’t the answer under center, realizing that Stafford could be.

This was all made possible by Aaron Donald being an absolute game-wrecker, winning three Defensive Player of the Year awards, giving the Rams confidence that they could stop anyone. As we witnessed on the biggest stage in Super Bowl LVI, Donald came through when he was needed most, but it took Stafford to help get them to that point to begin with.

These days it’s all history. Donald finally got his ring, Stafford proved he can be a playoff quarterback and then some. Now the Rams are eager to run it back, along with a new weapon for Stafford to benefit from after adding Allen Robinson in free agency.