It seems that if the Utah Jazz makes a Donovan Mitchell trade soon, it could open the door for the Los Angeles Lakers to move Russell Westbrook in a deal for a player they have targeted this summer.

There has been a lot of scuttlebutt around the NBA over Brooklyn Nets star Kevin Durant and how his trade request could hold up other deals around the league. Since many teams could make offers to the Nets for the 12-time All-Star. However, that may not be the only trade domino that could have notable ripple effects.

Over the last week, the idea of the Jazz making the transition to a complete rebuild and trading top star Donovan Mitchell is a real possibility. The organization is reportedly as willing as ever to hear trade proposals and the New York Knicks seem to be the early favorite. Yet, if a deal with the Knicks or even the Miami Heat does come to pass, it could have an effect on the Los Angeles Lakers’ offseason plans.

On a Friday edition of Jake Fischer’s “Please Don’t Aggregate This” podcast, the Bleacher Report NBA insider reported that executives around the league believe that if the Jazz does fully dive into rebuild mode a trade between them and the Los Angeles Lakers could be possible. And that the Lakers would land a player they covet in veteran defensive ace, Patrick Beverley.

The Jazz acquired Beverley when they sent Rudy Gobert to the Minnesota Timberwolves in June. However, since the deal there have been rumors he won’t be in Utah by the time training camp comes around. 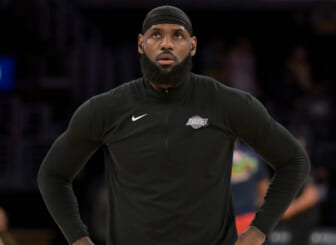 Also Read:
Los Angeles Lakers’ Lebron James slams response to Brittney Griner situation: ‘How can she feel like America has her back?’

Westbrook and his $47 million contract for this season have been seen as untradable. Despite new head coach Darvin Ham and general manager Rob Pelinka publicly stating their interest in having the former league MVP return next season, his poor chemistry with fellow superstars Lebron James and Anthony Davis after one season in Los Angeles has kept the door open for a trade this offseason.