The Miami Heat are well aware that draft picks, and a whole bunch of them, are the best asset to have in possible trades for superstars Kevin Durant and Donovan Mitchell, and it seems they are on the hunt to get more and improve their chances in making a deal for either.

For the most part, the 2022 NBA offseason hasn’t been filled with shocking signings and stunning trades. Outside of Rudy Gobert being traded to the Minnesota Timberwolves, many of the top players that were up for grabs returned to the teams they played for in 2021, including Deandre Ayton’s Indiana Pacers offer sheet being matched by the Phoenix Suns.

However, what has earned the most headlines this summer is the possibility of top stars being shipped off in massive deals. Mitchell, Durant, and Kyrie Irving are all reportedly up for grabs, and the first two are expected to land the Utah Jazz and Brooklyn Nets a serious haul of draft picks. Especially, after Utah acquired four first-round picks for Gobert, a player a few levels below Mitchell and Durant in value.

One team that has been rumored to be in play for both is the Miami Heat. The Eastern Conference Finals runners-up will be title contenders next season and either man would seriously increase those chances to win a championship. However, while the Heat has most of their first-round picks in upcoming years, they don’t have the incredible amount the Knicks — the favorite to land Mitchell — have with eight in the next few seasons.

On a Friday edition of “Please Don’t Aggregate This,” Bleacher Report NBA insider Jake Fischer revealed Miami is working hard to build up their trade capital to compete with New York for Mitchell, which could also boost their offering in a possible Durant deal.

While a swap between the Jazz and Knicks seems to be the likeliest scenario, a deal is far from done and the Jazz is reportedly looking for a ton of picks. “I was told directly they asked for seven [draft picks] and they’re open to negotiation,” Fischer said on his podcast about New York and Utah negotiations. 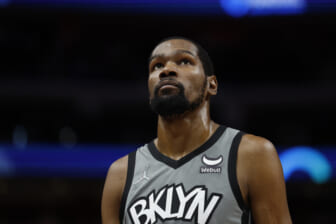 The Heat may not get Mitchell, but landing more picks is still worthwhile for a possible Durant deal this summer or something major at the trade deadline in 2023.