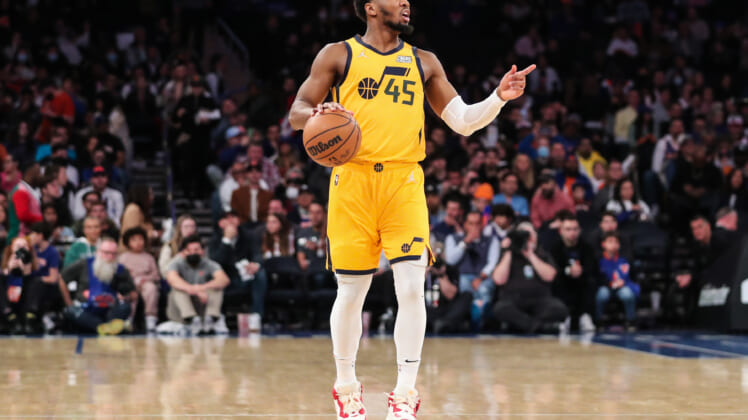 The New York Knicks have been positioning themselves for years to swing a blockbuster trade for a superstar. With the Utah Jazz shopping Donovan Mitchell, it seems New York is more motivated than ever to acquire a new face of the franchise.

Utah is launching into a rebuild, making Mitchell, Patrick Beverley and numerous veterans available for future draft picks and young talent. It’s a pool of assets the Knicks have compiled over several years, waiting for the right player to become available.

Mitchell, a New York native, is their target. While the Miami Heat are drawn to Kevin Durant, New York wants the young superstar it can build a team around and make the star at Madison Square Garden. Unsurprisingly, the front office started laying the groundwork on a move the instant it knew Mitchell could become available.

NBA reporter Adrian Wojnarowski provided some insight on ESPN, detailing the initial conversations between the Knicks and Jazz. He also shed some light, based on conversations with executives around the league, about where things stand right now.

The biggest road block right now is Danny Ainge’s asking price. Many around the league believe Utah’s top executive fleeced the Minnesota Timberwolves in the Rudy Gobert trade. Dating back to his years with the Boston Celtics, Ainge has a reputation for only taking deals he believes he clearly wins.

New York, just like every other team interested in Mitchell, knows this. While it is willing to trade multiple first-round picks, at least four, it won’t include that many picks and all the young talent Utah wants.

Speaking to that, Wojnarowski shared that he doesn’t believe New York and Utah are talking regularly to try and negotiate a deal in the coming days. Instead, the two clubs will likely continue to revisit talks every few weeks.

While fans want a deal as soon as possible, that’s clearly not happening. New York knows Ainge is trying to take advantage of the situation, recognizing this is a franchise desperate for a star. For as much as the Knicks want Mitchell, they also won’t keep bidding against themselves just to land him.

Ultimately, it would still be a surprise if Mitchell isn’t suiting up for the Knicks at some point this season. Much like with Durant, it might just take several months before a trade happens.