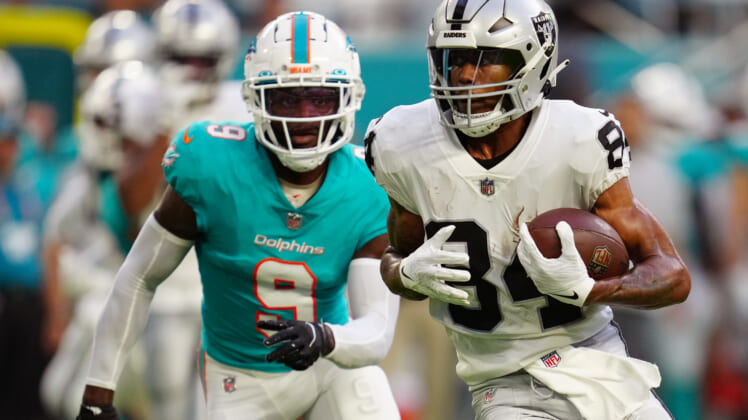 The Las Vegas Raiders made the trip to Miami without some key players, looking to give players the opportunity to seize a roster spot up still up for grabs.

Those players did their best to make the most of their chances as Las Vegas squeaked by the Miami Dolphins 15-13.

The kickers were the deciding factor late as Raiders’ Daniel Carlson made his from 31 yards out with 4:38 remaining in the game while Dolphins kicker Jason Sanders missed his from 46 yards out with 1:37 left in the game to give the Silver and Black a happy flight home.

Here are five takeaways from the two-point victory.

Las Vegas Raiders getting opportunity to work on unique situations

Every time during training camp, the Raiders are not only working on situations they would see in a game, but also the rare plays as well. It is not only the trick plays but the unique plays, such drop kicks or punting on third down.

The Raiders faced a similar play as they scored two points on a safety with the stellar defense. Linebacker Curtis Bolton provided the final pressure as Dolphins quarterback Teddy Bridgewater went down in the end zone.

Las Vegas then had the opportunity to return a kick as a result of a sack.

“Those things come up once, twice a season maybe,” head coach Josh McDaniels said after game. “A lot of different situations came up. We tried to do play them the best we could and certainly try to improve and get better. Definitely something to gain from all of them.”

Whether it is kick return from a safety or working on a two- or four-minute offense, the Raiders have been able to take advantage of these unique situations not only in practice, but in a game format.

On Wednesday, cornerback Rock Ya-Sin made his return to the practice field and made the trip to Miami.

Ya-Sin, who got the start and played in a couple of early drives, recorded two individual tackles, despite having an illegal contact penalty against him (that was declined).

Both of his solo tackles came on back-to-back plays in the final minute of the first quarter against some of the Dolphins projected starters, including running back Chase Edmonds and tight end Mike Gesicki.

Having his presence in the lineup is crucial moving forward as a player who came to the Raiders via trade during the offseason.

What Kenyan Drake getting reps means

One of the most heated battles during training camp has been at the running back position. In the opening drive, rookie Zamir White got all the running back touches, en route to completing a 12 play, 75-yard drive that lasted about six minutes with a two-yard rushing score for an early 7-0 lead.

However, on the ensuing drive, running back Kenyan Drake saw touches as he recorded three carries for six yards as well as catching all three of his targets for 10 yards.

With the increased competition at the running back position along with the thought of targeting how many running backs the Raiders will hold on the 53-man roster, there’s a good possibility McDaniels and general manager Dave Ziegler are evaluating who they have at the bottom of the depth chart as the team has to either cut or trade players.

The Raiders have to lower their roster from 85 to 80 players before Tuesday.

With White, Josh Jacobs, Ameer Abdullah and Brandon Bolden, that is already four players at or above Drake in the backfield depth chart.

Last week against Minnesota, Tyron Johnson made his presence in the discussion to be the team’s third wide receiver behind Davante Adams and Hunter Renfrow.

Not only did Johnson get some volume against Miami, but so did Keelan Cole Sr.

While Johnson recorded the most targets, Cole had the most yards amongst the wide receivers on a single play Saturday evening.

With the value both these players also provide on special teams, the third wide receiver role could easily be based on strengths that both Johnson and Cole bring to the Las Vegas Raiders.

The Aug. 30 deadline to cut the roster down to 53 players is a mere 10 days away as both are making the case for that starting role on both special teams and offense.

Tashawn Bower making his chance on the edge

The Raiders understand the value they have at the defensive end position with Chandler Jones and Maxx Crosby.

As a result, the opportunities during the regular season are backup roles behind the duo. 2021 third-round pick Malcolm Koonce provided depth a season ago. This year, a new face is emerging to have a backup role.

That player is Tashawn Bower, who has been New England and Minnesota during his five-year NFL career.

Bower, who spent the entire 2020 season with the Patriots and split time between New England and Minnesota last year, has recorded ample playing time during training camp. Against Miami, Bower recorded two tackles for loss, a sack and four of his five total tackles individually.

“This is not my first year being around Tashawn and he loves to play football,” Las Vegas Raiders head coach Josh McDaniels said. “He’s doing his job the right way and he’s setting a good example for the way we want to try to play on the edge with his opportunities. He rushed the quarterback, and he used some power.”

Up next, Bower and the Las Vegas Raiders will have joint practices this week against New England as familiar faces will get to work on one another before playing against each other on Aug. 25 inside Allegiant Stadium for the preseason finale.