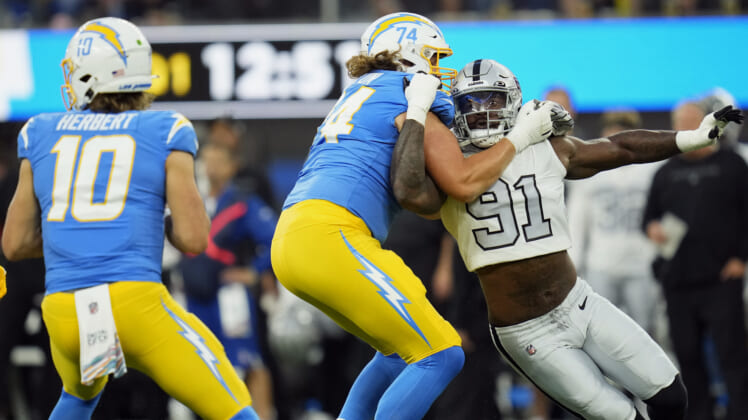 Pro Bowl pass rusher Yannick Ngakoue will now be on his fifth team over the past four seasons after starring for the Las Vegas Raiders in 2021.

Mere minutes after it was reported that Vegas has signed fellow Pro Bowl edge guy Chandler Jones, information leaked that the Raiders have sent Ngakoue to the Indianapolis Colts in a player-for-player swap. Las Vegas receives stud young cornerback Rock Ya-Sin in the trade.

For the Colts, this deal makes perfect sense. They struggled finding a pass rush threat from the outside next to stud defensive tackle DeForest Buckner. Yannick Ngakoue will more than provide that moving forward.

As for the Raiders, they acquire much-needed cornerback help after yielding 29 passing touchdowns against a mere six interceptions a season ago.

Impact of Yannick Ngakoue heading to the Indianapolis Colts

This represented the second time in Ngakoue’s six NFL seasons that he has recorded double-digit sacks. The former Maryland star accomplished that feat as a member of the Jacksonville Jaguars back in 2017 when he recorded 12 sacks en route to earning his only Pro Bowl appearance.

Buckner recorded a total of seven sacks for the Colts last season, leading the team in that category. Defensive end Al-Quadin Muhammad was second with six sacks. Needless to say, this was a major need for general manager Chris Ballard and Co.

The Raiders attempted to rely a lot on youngsters at cornerback last season. Despite earning a surprising spot in the playoffs, there was a major need here. It’s in this that Vegas has been linked to Pro Bowler Stephon Gilmore in NFL free agency.

As for what Ya-Sin brings to the table, he’s still only 25 years old and offers a wealth of upside at corner. Last season saw him record 31 tackles and eight passes defended. Opposing quarterbacks completed a mere 53.3% of their passes when targeting him. They also boasted an 88.8 passer rating.

Facyson yielded a 94.8 QB rating and six touchdowns when targeted. Meanwhile, Hayward saw major regression from his Pro Bowl years with the Chargers — giving up a 91.9 rating.