The Las Vegas Raiders remained dormant on Monday as teams around the league flirted with and signed notable free agents before NFL free agency officially started on March 16. However, the Silver-and-Black beast is awake and has targeted one of the best cornerbacks on the market.

Yesterday, a slew of big signings were made in the NFL. As teams were able to legally speak with free-agent targets and agree to terms on contracts that will become official once they are filed with the league on Wednesday.

Las Vegas Raiders in the ‘thick’ of hunt for Stephon Gilmore

Yet, despite having a strong season in 2021– finishing 10-7 — and needing to fill some holes for new head coach Josh McDaniels the Raiders were non-existent during the first day of the legal tampering period of 2022 NFL free agency. However, that seems to be changing on the second day of league-wide conversations.

On Tuesday, Las Vegas Review-Journal reporter Vincent Bonsignore tweeted that the team has started to make their push into the market and has targeted a five-time Pro-Bowl CB. “Raiders in the thick of things with Stephon Gilmore,” he wrote.

The team could use some remodeling and improvements in their defensive secondary and the 31-year-old veteran would be a serious addition to that pursuit. Plus, he is the best CB left on the market after the Los Angeles Chargers gave J.C. Jackson a massive deal, and Charvarius Ward and Carlton Davis were taken off the CB board as well.

During his 10-year career in the NFL, Gilmore has played with the Buffalo Bills (five seasons), New England Patriots (four seasons), and a season with the Carolina Panthers in 2021. He has been voted to the Pro Bowl each of the last four years.

If he were to sign with Las Vegas, it would be a reunion with long-time Patriots offensive coordinator and new Raiders head ball coach McDaniels.

The Raiders currently have the sixth most available cap space in the league heading into Tuesday, with over $30 million to throw at key free agents. 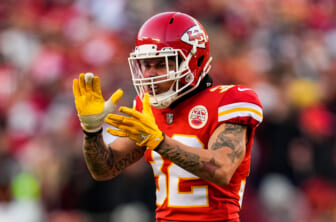