The first day of the NFL’s legal tampering period came and went, but the Las Vegas Raiders didn’t make a move, which frustrated some fans.

Think back to previous offseasons when the Raiders jumped out early to sign offensive tackle Trent Brown, defensive back Lamarcus Joyner, linebacker Cory Littleton, and Nick Kwiatkoski. None of those acquisitions played up to their contracts and only the last of the four still holds a spot on the roster as a backup.

We often forget about the under-the-radar or secondary wave of signings that worked out in the Raiders’ favor such as wideout Nelson Agholor, Quinton Jefferson, and Solomon Thomas, who played roles in the turnaround of the defensive line last year, and cornerback Casey Hayward Jr.

Don’t push the panic button unless the Las Vegas Raiders miss on an entire class of free agents, which hasn’t happened within the first 24 hours of the legal tampering period. In fact, there are quality free agents available on the market and many of them can fill the Raiders’ roster needs.

DJ Chark Jr. came to an agreement with the Detroit Lions Tuesday morning, per ESPN’s Adam Schefter, but Vegas can still add a big-play receiver who can stretch the field in Marquez Valdes-Scantling. Though inconsistent with a 49.8 percent catch rate, he averages 17.5 yards per reception. The 6’4″, 206-pound wideout must work on his efficiency but has the ability to bring an explosive element that Vegas needs in the vertical passing game. If Ziegler can avoid overpaying for him, he’s worth a spot on the depth chart for a specific role.

Through four seasons with the Chicago Bears, James Daniels has played all three interior positions across the offensive line—most recently right guard in 2021. According to Pro Football Focus, he allowed just three sacks but committed nine penalties, which may result from moving from the left to the right side for the first time on the pro level. For the most part, he’s played well through his tenure in the Windy City, keeping his pressures and infractions to a minimum.

If you connect the dots, remember, Raiders assistant general manager Champ Kelly served as the assistant director of player personnel in the Bears’ front office when the team selected Daniels in the second round of the 2018 draft.

A solid run-stopping nose tackle isn’t going to excite the fanbase, but Graham favors massive bodies in the trenches to plug the run and keep his edge-rushers and second-level defenders free to make plays in the backfield. At 6-foot-3, 325 pounds, Eddie Goldman fits the size requirement. Even more noteworthy, he showed the ability to occasionally push the pocket early in his career, logging 11.5 sacks between the 2015 and 2018 seasons. At 28 years old, he can become a building block and centerpiece for a revamped defensive line.

In his heyday, Calais Campbell played 70-plus percent of the defensive snaps. At 35 years old, going on 36 in September, he cannot play at a high level with that workload. The six-time Pro Bowler and All-Pro could be effective while on the field for 60-66 percent of the snaps, which is fine because most defensive linemen fall into that range or below anyway. Say what you want about his age, but he can still stop the run. 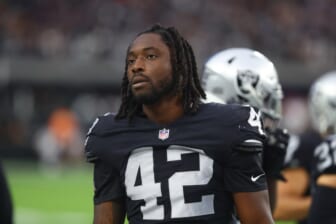 Over the past two seasons with the Baltimore Ravens, Campbell logged 77 tackles (47 solos) and 10 for loss. He’s similar to Ndamukong Suh, who’s lost a step as a pass-rusher but remains stout against the run. With that said, the former would likely cost the Raiders less than the latter.

Bobby McCain played under Graham, who served as the Miami Dolphins defensive coordinator for the 2019 season. As primarily a free safety that year, he recorded two interceptions and three pass breakups through nine contests, but his season ended prematurely because of a shoulder injury. The 28-year-old has a lot of experience in the center field as a free safety and in the slot, which makes him a scheme fit for Graham’s big nickel alignments. 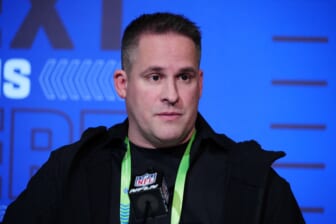 McCain had an impressive 2021 campaign with the Washington Commanders, recording career highs in interceptions (four) and passes broken up (nine) while allowing a 62.5 percent completion rate and 65.5 passer rating in coverage.

The Buffalo Bills released Daryl Williams hours before the legal tampering period started on Monday. The club decided to save some money, but as NFL Network’s Mike Garafolo reports, the two sides could come together again. Vegas should consider him an option at right tackle. He’s played his best years as a full-time starter at the position (2017 with the Carolina Panthers and 2020 with the Bills). Nevertheless, the 29-year-old has experience at right guard if the coaching staff wants to shift Leatherwood back to right tackle.

Morgan Moses should list near the top of the Raiders’ wish list out of sheer need. Head coach and play-caller Josh McDaniels cannot trust Alex Leatherwood at right tackle yet. Denzelle Good has played a lot more snaps at guard (1,927) than right tackle (861) through his pro career. Per PFF, Moses allowed four sacks and only committed three penalties through 1,022 offensive snaps this past season. Most importantly, the Raiders can rely on him. He hasn’t missed a start since his 2014 rookie campaign.

Defensive coordinator Patrick Graham’s two-year tenure with the New York Giants suggests that he values versatile safeties, particularly defenders who can line up in the slot and deep center field. In the second round of the 2020 draft, Big Blue selected Xavier McKinney, who lined up in multiple spots within Alabama’s secondary. With the Giants, Logan Ryan transitioned from an outside-inside cornerback to an all-around safety who played most of his snaps in center field but spent significant time closer to the line of scrimmage and in the slot as well. 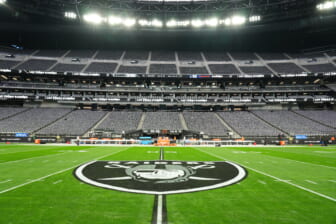 Tyrann Mathieu has the football IQ and experience in moving around the secondary to play a key role in Graham’s scheme. On top of that, he’s a ball hawk (26 career interceptions) who can help the Raiders generate more turnovers, which is an area they’ve struggled in since 2017:

Looking at wideout Christian Kirk’s reported four-year contract worth up to $84 million with the Jacksonville Jaguars (h/t ESPN’s Adam Schefter), Allen Robinson II might break the bank with a receiver-needy team. If he doesn’t, the Raiders could add him to their pass-catching group with star tight end Darren Waller and wideout Hunter Renfrow. That trio can keep up with the offensive attacks within the AFC West.

Robinson has played with Blake Bortles, Mitchell Trubisky, Nick Foles, and Justin Fields. Derek Carr would be his best quarterback by a wide margin. He’s a No. 1 wideout who’s been suppressed by subpar quarterback play throughout his career.

J.C. Jackson will reportedly take his talents to Los Angeles and join the Chargers, which means the Raiders are likely on the hunt for a lead cornerback to replace Hayward. Stephon Gilmore is coming off a down year compared to his All-Pro campaigns (2018 and 2019), but he’s still a high-level cornerback who can take on lead receivers one-on-one and allowed a 78.6 passer rating in coverage through the 2021 season. Now months removed his quad injury, he could revert to tip-top form behind Vegas’ solid pass rush.