Could one workout crash Mac Jones' 2021 NFL Draft stock? If the reactions of Kyle Shanahan and Bill Belichick are any indication, the answer is yes. 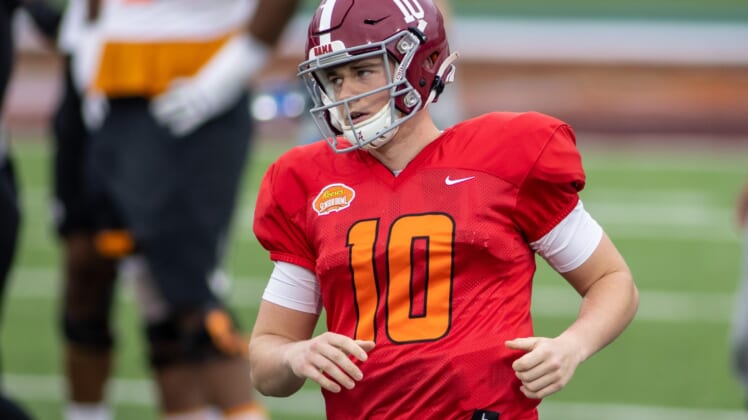 Alabama quarterback Mac Jones is being linked to the San Francisco 49ers and New England Patriots in the 2021 NFL Draft, but the signal-caller failed to impress Kyle Shanahan and Bill Belichick in Tuesday’s pro day showcase.

Jones has already had his official pro day, but thought it’d be fun to have a second go-round. The Crimson Tide produce so many pro players that they need more than one pro day to show them off.

Yeah, it might’ve been for the best if Jones had just sat out instead based on how he fared.

But the Patriots don’t pick until 15th overall and may be out of range to get Jones anyway. It was the 49ers who traded up in a big way with the Miami Dolphins, moving from 12th to third with an eye on their QB of the future.

Based on how Shanahan and San Francisco general manager John Lynch gazed upon the gridiron after Jones airmailed his intended target on this attempt, maybe they aren’t interested in his services:

The most notable incompletion in 49ers history came when Jimmy Garoppolo missed Emmanuel Sanders on what would’ve been a go-ahead touchdown late in Super Bowl LIV. That throw by Jones was eerily reminiscent of Jimmy G’s misfire.

But to be fair to Jones, these aren’t normal circumstances. He’s passing against air, and showed plenty of touch and downfield accuracy when he was in game action for Alabama, leading them to a national championship with the highest completion percentage in NCAA history (77.4%).

Not all of his throws were bad, such as this one to reigning Heisman Trophy winner DeVonta Smith, who participated a little bit in Tuesday’s theatrics:

To counter that point, though, all eyes are on Jones now. He’s no longer distributing to a loaded corps of receivers with the best, biggest linemen in the country blocking for him and Najee Harris behind him in the backfield.

Can Jones handle being “the guy” in the NFL? Can he succeed when the circumstances are less than ideal? These are legitimate questions, and when the pressure was on during Tuesday’s workout, he came up short.

No cut-to reaction from Shanahan or Belichick on this one, but you can imagine they weren’t jazzed about it.

Are the 49ers and Patriots really interested in Mac Jones?

Ever heard the term “silly season” when it comes to the NFL Draft? That means teams are sending out smokescreens all the time to throw rivals off their scent, clouding their true draft day intentions.

Obviously, New England and San Francisco are going to do their due diligence and evaluate quarterbacks as much as possible. Cam Newton isn’t viewed as a long-term option by the Patriots, and the 49ers have already told everyone they’re drafting a QB.

Before these pro day shenanigans, NBC Sports’ Chris Simms, a close friend of Shanahan’s, speculated that the 49ers’ trade up meant Jones was probably going to be their choice at No. 3 overall:

Meanwhile, Belichick has a long-standing relationship with Alabama head coach Nick Saban, and sometimes a picture is worth 1,000 words instead of bloviating about all the logical links between Jones and New England, courtesy of The Boston Globe‘s Jim McBride:

All that said, the buzz surrounding Jones may all be fictitious. Or maybe, just maybe, Belichick and Shanahan are hamming up their reactions for the cameras and secretly really like Jones. Anything they see in a rather meaningless workout isn’t going to change their perceptions.

Whatever the case may actually be, it’d make more sense for either the Patriots or 49ers to draft a higher-upside, more dynamically athletic QB like Ohio State’s Justin Fields or North Dakota State star Trey Lance. That’s especially so if the plan is to sit them for a year.

The draft is less than a month away, so we’ll know soon enough. Just don’t expect San Francisco fans to take it well if it’s revealed that the Niners traded two future first-round picks for Jones as opposed to Fields or Lance. It won’t be a popular pick.