Kyle Larson and Chase Elliott’s incident is being overdramatized

Kyle Larson and Chase Elliott's incident has been the talk of social media ever since it occurred on track. This is why the situation is being overdramatized.

Before Kyle Larson went on to win his first race of the 2022 NASCAR Cup Series season at Auto Club Speedway, he was at the forefront of conversations due to his incident with teammate Chase Elliott.

However, Larson and Elliott’s on-track issues are being overdramatized.

Kyle Larson’s spotter was the one to take blame

Many people have been on Kyle Larson’s back due to this late block that put Chase Elliott in the wall, effectively ending his race and finishing in 26th place.

However, Larson’s spotter, Tyler Monn, was the one to take the blame for the incident on Twitter after the race on Sunday.

Monn said he was focused on the side-by-side racing with Joey Logano and could not rely on the information on Elliott to Larson fast enough.

This seemed to back up the words by Kyle Larson in his press conference when the defending Cup Series champion said he was unaware of Elliott being there.

While no one is saying the 29-year-old driver is not at fault for Elliott’s 26th place finish, it’s important to understand how there was no malicious intent on his part.

In fact, there was more intent in an incident last weekend at the Daytona 500 and many people hyping up the Larson-Elliott situation were not doing it then.

Team Penske had a similar issue in the Daytona 500

Team Penske found themselves in a tighter situation after Austin Cindric put Ryan Blaney into the wall at the end of the Daytona 500 which ended his chances to win the event.

Blaney was not happy on the radio and said a vulgar line that was trending on social media later that week. The 28-year-old driver still finished in fourth place, but a teammate put him in the wall in NASCAR’s biggest race.

Yet, the same people who are pouring gasoline onto the Kyle Larson-Chase Elliott incident were not doing the same for the Cindric-Blaney conflict.

While Elliott found himself in 26th place, Blaney’s fourth-place finish at the Daytona 500 is more of a reason to be angry. He had an opportunity to put his name on a selective list after getting close so many times.

Obviously, Cindric had complete intentions of putting his teammate into the wall. To Cindric’s credit, who would not do the same for their first Daytona 500 victory?

However, Team Penske saw teamwork during the final lap of the Daytona 500 in 2008 when Kurt Busch pushed Ryan Newman to victory.

While Kyle Larson’s move up the track was not intentional, does it rise to the level of Cindric’s move? 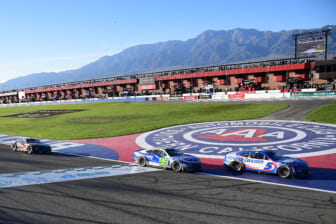 Rivalries are meant to grow naturally, not to be pushed

The sport needs these types of feuds to market their product. It lets people take sides and support their driver by buying merchandise and people outside of NASCAR recognize it.

However, Kyle Larson and Chase Elliott do not meet the criteria for a rivalry. They are not at the level of Jimmie Johnson v. Jeff Gordon, but they could reach that territory eventually.

Just like the Elliott v. Kevin Harvick feud last year, media and other individuals have made something out of nothing for Larson and Elliott. Yes, the 2020 NASCAR Cup Series champion can be angry, but it’s not a rivalry.

There will be nothing to look for moving forward. They can’t manufacture an in-team rivalry and try to put the two stars of Hendrick Motorsports against each other.

Rivalries need to be original. They need to ignite the flames by themselves and not because people are pushing for it to be a story on a weekly basis.

If Larson and Elliott find themselves in a heated rivalry in the future, it will be due to another moment that could happen on the track.

For now, the Larson-Elliott incident is just like the Cindric-Blaney incident. It’s nothing until something natural on the track changes that narrative.