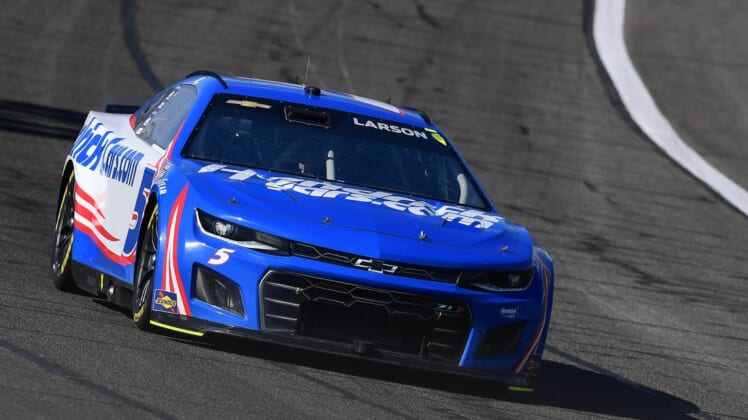 Kyle Larson held off Austin Dillon in a four-lap sprint off a final restart to get his first victory of 2022 Sunday, winning the Wise Power 400 at Auto Club Speedway in Fontana, California.

Running second to Daniel Suarez with three laps left, Larson dove low at the start-finish line to make the winning pass and win for the second time at the superspeedway.

The defending NASCAR Cup champion, whose winning No. 5 car had an electrical issue in the dash panel that needed to be addressed, had to start at the rear of the field. It didn’t matter, as he got his 17th win by leading 27 of the final 34 laps of the 200-lap event.

He overcame late contact on restart with his teammate Chase Elliott, who slapped the wall and soon spun out to force the 12th caution.

There were 12 cautions, as drivers experienced their first time with the Next Gen car — featuring higher horsepower and a taller rear spoiler — on the two-mile oval.

Winless in his Cup career, California native Tyler Reddick appeared to put himself in great shape by winning the first two stages and leading 10 times for a career-high 90 laps, but he cut a tire and got damage while leading with 50 circuits remaining.

In the first Cup race at the superspeedway since March 1, 2020, polesitter Austin Cindric — who won Daytona last Sunday — brought the 36-car field to the green flag but failed to lead a single lap after being passed on the low side by Jones.

Elliott grabbed the lead on Lap 23 but smacked the wall hard 10 circuits later, allowing Reddick to take the point spot.

Reddick claimed the bonus points on the race’s 65-lap first stage — his fifth career stage win — by beating Jones to the line and leading 39 laps.

Following Brad Keselowski’s spin near the same spot, Reddick led a nine-lap sprint to win the second stage and topped Jones by 1.58 seconds at Lap 130.

But Reddick cut a left rear tire with 50 left and was struck by William Byron’s car, ruining Reddick’s day.

Logano led a restart with 44 to go, but contact between Bubba Wallace and Keselowski triggered the 10th caution, involving four cars.

Logano’s Ford paced a restart nine laps later, but Larson’s Chevrolet soon moved around him and to the front on Lap 167 to set up the wild finish.