Tampa Bay Rays’ outfielder Kevin Kiermaier has been mentioned in a handful of trade rumors this MLB offseason, as he can potentially hit the open market after the 2022 season. Plus, the Rays wheel and deal like nobody’s business.

What Kiermaier lacks at the plate he makes up for in the field. The 31-year-old is an excellent defensive center fielder who also has a degree of pop from the left side. Kiermaier is a valuable outfielder no matter the type of ballclub he’s on.

The Rangers have had the clear-cut best free agent spending spree in the American League, specifically signing Corey Seager, Marcus Semien and Jon Gray. Acquiring Kiermaier would be a savvy way for them to put the finishing touches on an impactful offseason.

Texas’ outfield rotation is made up of Adolis Garcia, free agent signee Kole Calhoun, Nick Solak, Eli White and Willie Calhoun. There’s versatility with this group. For starters, Calhoun, when healthy, frequently serves as the team’s designated hitter. Meanwhile, Garcia is adept at playing both center and right field. Kiermaier can play center in Texas.

The veteran adds a comforting player to the outfield mix and someone who’s accustomed to being an outfield commander. He allows the Rangers to buy some time with young outfielders like Solak and White. Kiermaier beefs up the Rangers’ defense and helps balance out the mix of left- and right-handed hitters in manager Chris Woodward’s offense.

He adds more depth to a lacking part of the Rangers’ depth chart of late while improving them in a handful of ways. If the Rangers are going to turn the corner in emphatic fashion this season, they need proven commodities like Kiermaier.

All that said, the Rangers may prefer to play Solak and/or White on a near-everyday basis, rather than trading a prospect or two for Kiermaier.

The Tigers are a team on the rise, a notion furthered by their offseason spending. Detroit has signed star infielder Javier Baez and left-handed starting pitcher Eduardo Rodriguez. Kiermaier would be another worthwhile, veteran addition.

He provides a smooth fielder who has been there, done that to an outfield mix that is a bit precarious. Grossman has been up and down at the plate. Baddoo has one MLB season under his belt. Reyes has never gained substantial traction. The Tigers know what they’d be getting from Kiermaier, as he would serve as a veteran complement to their establishment.

Kiermaier bolsters a Tigers team that’s coming off a 77-win season and has an outside chance at cracking the American League Playoffs this season. Worst-case scenario, Kiermaier becomes a bridge to top outfield prospect Riley Greene.

The factor that could stop the Tigers from trading for Kiermaier, though, is them preferring not to block Greene’s path to a consistent role on the big-league club in 2022.

San Diego recently acquired first baseman Luke Voit, who provides a plausible power threat from the right side and possibly as the team’s designated hitter. Acquiring Kiermaier would fill another void, that being the Padres’ need for another starting-caliber outfielder.

Tommy Pham, the Padres’ primary left fielder over the last two seasons, remains a free agent. Manager Bob Melvin has a handful of respectable outfielders. Wil Myers has power from the right side. Trent Grisham is an efficient center fielder with upside. Jurickson Profar can play seven positions. On the other hand, none of these players are jumping off the screen. 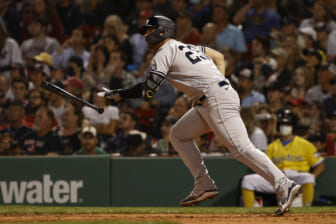 To be fair, Kiermaier wouldn’t solve the Padres’ lack of an intimidating hitter in the outfield. That said, he adds another starting option. Kiermaier can assume one of two roles with the Padres: 1) be their starting right fielder, where he briefly played earlier in his career, or 2) be their fourth outfielder.

One way or another, Kiermaier adds depth to a team with World Series aspirations. It’s virtually impossible for the Padres to replace Fernando Tatis Jr.‘s offensive production for the first-half of the season. Their best bet is to find an internal replacement for Tatis (C.J. Abrams?) and improve other aspects of their roster. In this case, that means improving defensively with Kiermaier. Plus, it’s fair to expect accomplished starting pitchers like Blake Snell and Yu Darvish to perform better in 2022.

Kiermaier is a low-risk move for a team in search of high-reward solutions.