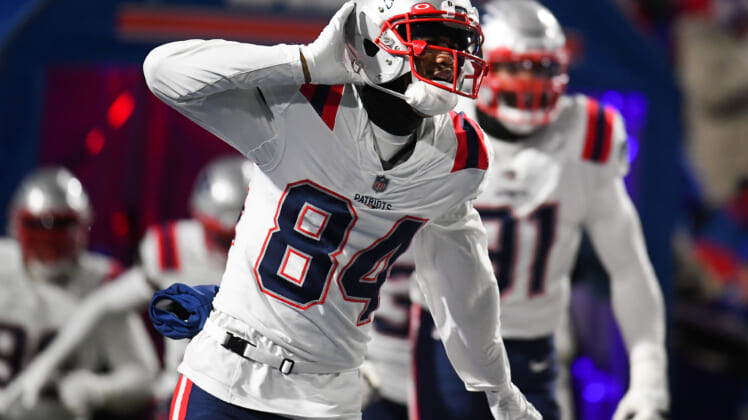 Despite not having a bonafide alpha No. 1 wide receiver, the New England Patriots have a fair amount of wide receiver depth, including Kendrick Bourne. While he’s not a household name either, Bourne was the team’s second-leading receiver during the 2021 season.

But there are several factors pointing to the possibility Bourne doesn’t make the roster in 2022. Or if he does, it may not be in a major role, giving him an outside chance to match or exceed his career bests from a year ago in his first season with the team.

Why Kendrick Bourne may be on thin ice with Pats

The Patriots played their first-team offense for a few drives on Friday night in their second preseason game of the season. Though Kendrick Bourne was nowhere to be found. He didn’t even dress for the matchup, staying sidelined all night.

Head coach Bill Belichick was asked about why Bourne didn’t see any action, and he had his typical, non-descriptive response.

“He wasn’t available,” Belichick said, as captured by Zack Cox of NESN.

We may have a pretty strong indication why, as Bourne was booted from practice earlier in the week after getting into a scrum during the team’s joint practice with the Carolina Panthers. He then was seen working with the second-team offense on the following day’s practice.

At this point, Bourne could be on the outside looking in as the Pats start paring down the roster from 85 down to 53 by August 30. Bourne joined the Patriots after four seasons with the San Francisco 49ers and signed a three-year, $15 million contract just last offseason. They can save $5 million by releasing Bourne, but it’s possible he has some trade value if a team is willing to part with a late-round selection.

The Pats also have Jakobi Meyers, DeVante Parker, rookie second-round pick Tyquan Thornton, and Nelson Agholor on the roster, which could be enough to help squeeze Bourne off the depth chart altogether. Though his practice antics likely didn’t help.

Bill Belichick’s never been afraid to shake up the roster

We’ve seen time and time again, whether it’s during the offseason or right before the regular season begins, Bill Belichick doesn’t care about outside perceptions, and he’s not afraid to make drastic roster changes.

Whether it was cutting Lawyer Milloy during the preseason following his second consecutive Pro Bowl appearance back in 2002 or trading multiple other veterans such as Trent Brown, Chandler Jones, Shaq Mason, or Stephon Gilmore, Belichick always does what he feels is best for his team.

We don’t even question him or his process anymore, but he always seems to leave us surprised. At this point you can only kick back, grab some popcorn and enjoy the show.

Related: An inside look at the New England Patriots’ offensive playcalling situation and how it impacts Mac Jones