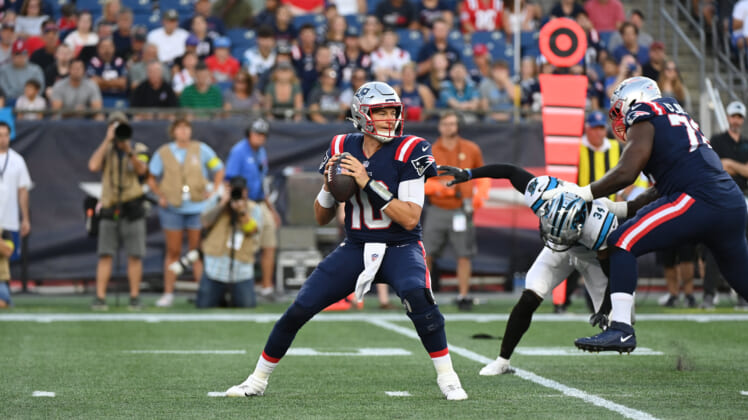 Fans tuning into the Friday night NFL Network broadcast between the Carolina Panthers and New England Patriots didn’t get to witness the starting quarterback battle play out. It appears Baker Mayfield has won the QB1 gig in Carolina, edging out Sam Darnold.

But we still got a QB competition of sorts, with rookie third-round pick Matt Corral and football journeyman P.J. Walker getting a chance to earn what could be the QB2 role behind Mayfield, should the Panthers decide finding a trade partner for Darnold is worthwhile, or possible.

Not only did we get to see the Panthers’ young QBs, we also got our first glimpse of how the first-team Patriots offense are doing since Josh McDaniels took his offense to Vegas. How did Mac Jones fare leading Matt Patricia’s offense on Friday?

Here are our three biggest takeaways from the Panthers vs Patriots Week 2 preseason matchup.

The biggest story out of Patriots camp this preseason has been the inefficiency of their first-team offense. Not only are they installing a new offense, we still haven’t learned the identity of their offensive playcaller.

Matt Patricia appears to be the frontrunner to relay plays into the ear of Mac Jones, but the speculation still stands. Bill Belichick has also been seen calling some offensive plays, and Joe Judge has as well. Patricia got the first chance on Friday during the 2022 preseason debut of Jones.

But it didn’t matter. The offense was still out of sync. Jones got off to a rough start with an errant throw, tossing it behind DeVante Parker and he got sacked for a six-yard loss on third down for a three-and-out.

His second drive wasn’t any better. Jones targeted Jakobi Meyers, but he once again was off, throwing it above his head. On his third throw, Jones rushed the release with pressure mounting in the pocket, throwing it to Rhamondre Stevenson before he was ready for the pass.

Jones ended up completed just 50% of his eight attempts on the day, totaling 61 passing yards. He showed the most rust in the first quarter, finishing with just 11 yards, before getting going a bit to start the second frame.

Basically, the first test for the Pats’ first-team offense was a failure. This may have been their last chance to compete before the regular season begins, as many teams don’t put their top units out there in the final preseason game. Maybe Belichick will handle things differently, knowing his offense could use some refinement.

Jones may have closed out on a high note, leading a touchdown drive in his final few snaps, but no one can be feeling overly optimistic about their offensive performance thus far. As far as we could tell, Patricia was the only one calling plays offensively for the Pats in this one.

Head coach Matt Rhule decided to rest both Mayfield and Darnold for this Week 2 preseason matchup. He wanted to get a look at Walker and his rookie Corral. The plan was for Walker to take the first and third quarter, giving him a chance against first-stringers, as well as those scratching and clawing to earn a roster spot.

The 27-year-old Walker looked erratic, rarely making on-target throws, and overall struggled to move the chains. He also threw two interceptions. Walker finished 8-of-15 with 107 passing yards while also taking four sacks, losing a fumble in the endzone to allow a touchdown. Most of those yards (42) came in garbage time, but so did one of his interceptions.

Corral handled the second and fourth quarters, and although it wasn’t by much, he operated Carolina’s offense a bit better than Walker, who’s entering his sixth season removed from college. Corral did well to escape a collapsing pocket, avoiding sacks on the day while extending the play for a chance at a bigger opportunity.

Yet, he made his fair share of mistakes. On one particular occasion Corral threw a very catchable ball to Patriots cornerback Jack Jones who flat-out dropped it. Corral also didn’t really have much production. He ended up completing 9-of-15 passes for 58 yards, and added six more yards on the ground.

In total, neither QB were particularly inspiring, but at least Corral’s effort has the excuse that he’s a rookie still learning the speed of the NFL level.

We don’t know what’s going to happen with Darnold, but it could be that the Panthers wanted to see if either of their other backups were ready to assume the QB2 role behind Mayfield. Corral was drafted for a reason, his roster spot is locked in, but Walker’s? He may have been campaigning to join a new squad tonight, and we’re not sure he did enough for anyone to carry him on their 53-man roster in 2022.

New England Patriots may have found a gem with Bailey Zappe

Though Bailey Zappe may have been the fifth-quarterback drafted, he hasn’t looked like a player teams should have overlooked in the pre-draft process. It’s kind of amazing. Zappe had an incredibly productive senior season with Western Kentucky, throwing for 5,967 yards and adding 62 passing touchdowns, yet he lasted until the 137th pick.

That’s OK, the Pats were happy to land the developmental QB.

Zappe has, well, some zap behind his ball. He also showed better than expected mobility, making throws on the run and operating the offense much smoother than the first-team. We know he’s going against second and third-string defenses, but he’s been impressive through two games.

We also saw some of Zappe’s inexperience as he adjusts to the pro level. Late in the third quarter Zappe may have zoned in on one receiver, or was just late to make the read, as he allowed Panthers cornerback Tae Hayes to easily jump the route for a pick-six. It proved to be Zappe’s biggest mistake of the day, but if it were a real game, it would be a costly one.

The Patriots also have Brian Hoyer on the roster, and his veteran experience should continue helping Zappe learn the game in his first season in the NFL. But so far so good for the 23-year-old QB.