The New England Patriots went into training camp hoping to erase concerns about the offense and play-calling after significant changes were made this offseason. With the NFL regular season closing in, there are now even more concerns out of Foxborough.

After play-caller Josh McDaniels left to become the Las Vegas Raiders head coach, Bill Belichick took an unusual approach to fill the void. The Patriots moved Joe Judge and Matt Patricia to the offensive coaching staff despite neither assistant having any substantial experience on that side of the ball.

Even before training camp began, players were concerned about the direction of the offensive coaching staff. As Belichick publicly refused to name an offensive coordinator or designated play-caller, reports noted this summer that Patricia often seemed to wear the headset and would call plays.

The last few weeks of training camp have only added to the skepticism regarding the Patriots’ offense. Mac Jones admits he is struggling this summer with Judge in his first year as quarterbacks coach. In addition, New England changed its run scheme and the results thus far have been troubling.

In his most recent summary of the Patriots’ issues, Chad Graff of The Athletic detailed just how bad things look right now for this unit during a recent practice.

All of this happened before New England’s first preseason game against the New York Giants. In that matchup on Thursday night, Patriots quarterbacks Brian Hoyer and Bailey Zappe averaged 6.6 yards per attempt with a combined 85.8 quarterback rating. However, the rushing attack averaged just 2.9 yards per attempt and the offense combined for just 21 points.

Belichick refused to acknowledge who the team’s offensive play-caller was after the game and he didn’t express much concern regarding the team’s issues in training camp.

While it’s possible the offense is simply being dominated by a great defense, it’s worth keeping in mind that the Patriots’ defense lost J.C. Jackson in free agency and it faces questions of its own. There likely won’t be any huge concern until the regular season, but Belichick’s decision to thrust assistants into roles they lacked the experience to handle seems to have backfired early. 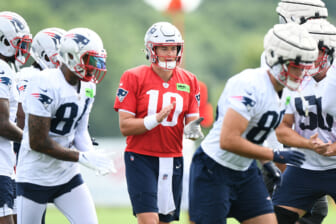