Mac Jones owns up to training camp struggles, vows to figure it out 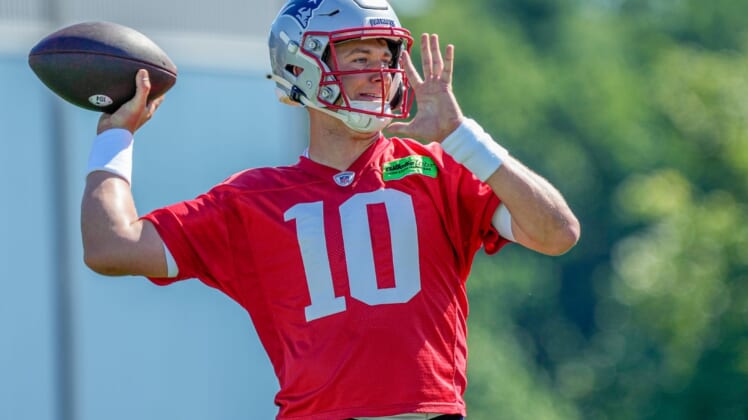 New England Patriots quarterback Mac Jones is entering a crucial year in his development. He may have been the best rookie quarterback from the 2021 draft class last year, but this is a new season.

As we’ve heard from Bill Belichick over the years, the Pats may have been a playoff team a year ago, but we don’t bring up the past. He’s only looking to the future.

The future for Jones is uncertain, in that while he played well, there’s also a certain level of pressure to show continued growth. Nobody wants to be sitting here at the end of the season, with the Patriots slipping back in the AFC East standings, wondering if Jones is truly the QB of the future in Boston.

Here Tom Brady was winning a Super Bowl in his second year as a pro. Nobody expects that out of Jones, yet anything less than another playoff appearance would be a disappointment. That’s just the standard in New England.

New England Patriots not doing their QB any favors

But there are factors that could be a major detriment to Jones in his second season, and they may already be rearing their ugly head.

His previous offensive coordinator Josh McDaniels accepted a head coach gig with the Las Vegas Raiders, leaving Jones without his experienced mind both on the sideline, but also in the headset.

How have the Patriots responded to losing their top offensive mind? That’s yet to be determined, but so far they’ve taken a special teams specialist in Joe Judge and made him the QB coach. Plus, they’ve taken a coach with a defensive background in Matt Patricia, a big role on offense too. It’s unknown who will fill the coordinator role, and call plays to Jones on gameday, but Patricia seems to be the early bet.

Or there’s always Belichick himself. No matter what, it’s going to be different for Jones. Will the change be good or bad?

So far things don’t appear to be going well. Multiple reports have suggested the offense has greatly struggled in camp, with many plays having “no chance” at all.

Are these just typical growing pains in camp, when defenses are routinely way ahead of the offense early on? Is Bill Belichick playing mind games, trying to make things incredibly difficult on his young QB, testing his mettle?

Or should we truly be concerned with the direction of the New England Patriots’ offense in 2022?

The QB himself is ready to acknowledge some of the team’s problems early on, and he’s confident in his ability to figure it out, in time.

Credit Jones for owning up to his struggles, even if they may not all be his fault. At the end of the day, Jones is the quarterback of the offense, so he’s responsible for their failures, and of course their successes too.

But Jones isn’t worried about how things have gone before preseason has begun. He’s been here before, not only with the Patriots, but also in college at Alabama. This isn’t his first rodeo. Jones knows he’ll have plenty of time to work out the kings before the Pats kick off on September 11 against the Miami Dolphins.