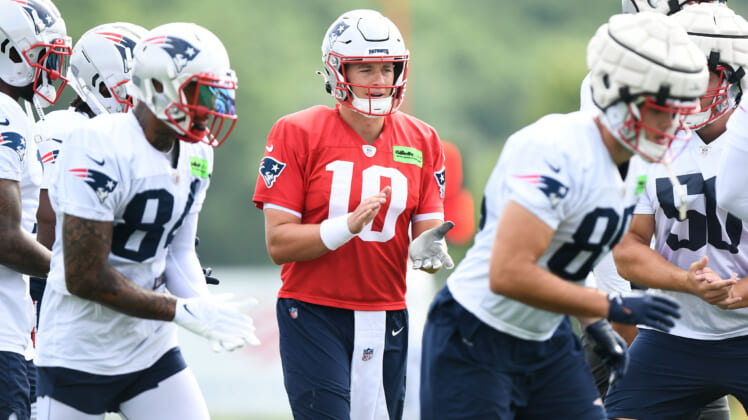 NFL training camps haven’t been open for long. The New England Patriots have been practicing since July 27, giving them just over a week since camp opened. But they’ve been in pads only since August 1, giving them very little time to get in the full swing of things thus far.

The latest report out of Patriots camp, courtesy of Mike Reiss of ESPN, suggests the Patriots may be experiencing some early struggles, offensively in their practices to this point.

It’s early in camp, and generally defenses are ‘ahead’ of the offenses at this stage. Plus, Belichick is a genius defensive mind. Why not make things tough on his 23-year-old QB before the games get underway? Belichick is known for trying to motivate and essentially prove his own players aren’t as good as they think. He knows the competition is stiff, so anything he can do to prepare his roster for the real games will be done.

Maybe that’s all this is, the fact that defenses are a few steps ahead of passing offenses with few practices under their belt. Yet, maybe the Patriots do have reasons to be concerned with their scoring attack heading into the season, thanks to an unsettled coaching situation.

While the Patriots are returning Mac Jones under center for his second NFL season, their offensive coordinator and play-caller won’t be around. Josh McDaniels used his many years of experience learning under Bill Belichick to give head coaching another go, departing for Las Vegas.

This has been a big talking point in New England all offseason, with many wondering who the new play-caller will be. In an odd move, Belichick hasn’t even announced an offensive coordinator for this season, leaving it as a mystery.

While they’ve added Joe Judge back, who’s been working with the team’s QBs, it’s Matt Patricia who’s expected to be in the ear of Jones, calling plays for the Patriots this season. This, again, is a question mark considering Patricia has been considered a defensive specialist in his career. Officially, Patricia’s title is ‘senior football advisor’, which is code for Belichick doesn’t want us to know.

Growing pains are expected any time a new coordinator takes over, and that appears to be the case in New England too. Still, I wouldn’t panic too much. Belichick won’t settle for anything less than excellent.