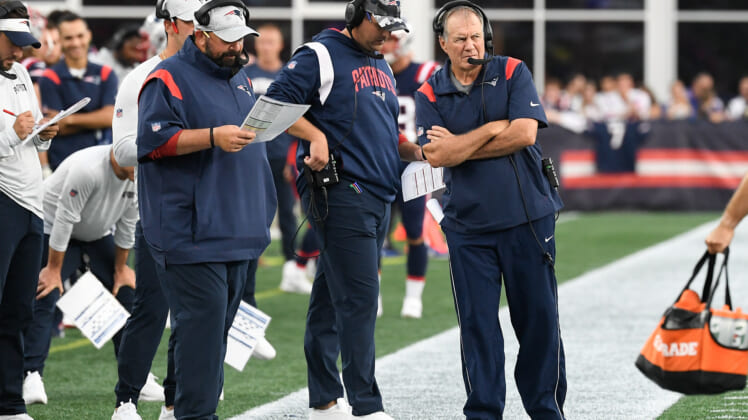 New England Patriots legend Bill Belichick has been viewed by the public as one of the best head coaches in the history of the game. So imagine the backlash that comes with questioning such a coach. Most just gave him the benefit of doubt when he decided to go with two offensive coordinators to start the preseason.

The thought of that alone is very unorthodox but then add to the scenario that neither of them have ever called plays in the NFL. Then add again that your quarterback is in his second year after a great rookie season under Josh McDaniels who is gone to coach the Las Vegas Raiders. You have to wonder what effect the Patriots play calling situation will have on the young quarterback and the offense as a whole.

With the departure of McDaniels, Belichick was left with a problem he hasn’t had in many years. He must replace one of the greatest offensive minds and play callers in the league. You would expect him and Patriots executives to scour the NFL landscape looking for a proven offensive play caller to try and fill the shoes left behind by McDaniels. To everyone’s disbelief, that’s not what happened.

Belichick named Matt Patricia and Joe Judge, two defensive minded coaches who are back after failed head coaching stints to be co-offensive coordinators. Something nobody has seen done and yet at first no big deal was made about it.

Belichick is considered a head coaching genius so he has to know what he is doing. Then news of how bad the offense was playing in camp started surfacing and it soon became the hot topic. When asked about it in any way Belichick answered the same “we are going through a process“. So does this process include sabotaging your young quarterback?

Related: Mac Jones owns up to training camp struggles, vows to figure it out

Last year Mac Jones came into the league with a lot of hype after he won the starting quarterback position and started the season playing great for a rookie. McDaniels’ play-calling ability was perfect for the young quarterback and he played like a veteran all season. Change came as his play caller left and he was asked to adjust to two new offensive styles from the co-coordinators.

Of course Jones and the offense are going to struggle. The first preseason game went just as we thought it would. Most of the Patriots starters didn’t play, including Jones. The offense looked confused and the play calling was questionable at best with Judge and Patricia taking turns at the role. This couldn’t be the plan of a future Hall of Fame head coach. Obviously Belichick saw this too because this week the coordinators were down to one.

Matt Patricia seems to have won the job for now based on what we saw during the second preseason game. He called the plays for the entire night with Belichick standing beside him most the game. It would seem either Belichick has Patricia on a short leash or he is helping him call the offense. Either way the offense responded a little better this week.

The starting offense with Jones behind center played for three possessions. They didn’t do much the first two, but they got into a rhythm on third possession. Overall the game flow and calls on offense went a little smoother but we’re still not convinced that Patricia should be the offensive coach this year.

A peek at the season ahead

This could be a very long season for everyone involved if the Patriots offense and sophomore QB isn’t given a definite offensive coordinator to follow and get familiar with. In no way can they be sure that Patricia is the one for the job and from what we know, he’s not.

Still Belichick, because of his history, deserves some belief that he knows what he is doing. He obviously knows or sees something with Patricia that we don’t. The Patriots’ offense will likely be fine once the regular season kicks off.

To be a great defensive mind you have to know a few things about the offense and the same in reverse. For now he gets my tentative confidence. We will see half way through the season if it differs.