Los Angeles Clippers forward Kawhi Leonard and his team are set to embark on a matchup against the Dallas Mavericks in the first round of the NBA Playoffs.

There’s a major backdrop for a Clippers team that finished with a 47-25 regular-season record. Former NBA Finals MVP Kawhi Leonard can opt out of his contract and become a free agent this summer.

While previous reports suggested that Leonard will likely return to the Clippers for a third season on a long-term contract, there’s now some doubt about this.

“I think Kawhi is staying with the Clippers. He hasn’t said that publicly, and he probably won’t until the day he signs that contract. I know there’s been some mention of Miami. Could Miami be a sleeper for him? I think he’s where he wants to be geographically,” ESPN’s Adrian Wojnarowski said recently. “I think he’s gotten along very well with the organization, with management, with ownership.” 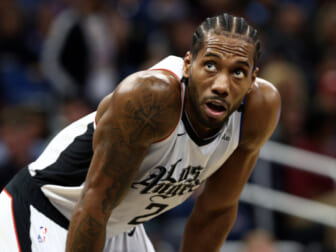 This is not in any way a guarantee that Leonard will end up returning to the Clippers. In fact, Woj indicated that their playoff performance could end up playing a role.

“But listen,” he said, “things can go sideways when all of a sudden you get knocked out of the playoffs earlier than you expect.”

This is precisely what happened last season in the Orlando bubble. Recently-extended forward Paul George struggled big time. And Leonard’s performance was not enough for the Clippers to avoid blowing a 3-1 series lead against the Denver Nuggets in the Western Conference Semifinals.

Heading into a first-round matchup with a talented Dallas Mavericks team that is seeking revenge after losing to the Clippers in last year’s NBA Playoffs, it’s in no way a foregone conclusion that Los Angeles will come out on top.

Meanwhile, in South Beach, the Miami Heat are looking to repeat as Eastern Conference champions after a ho-hum regular season. They’ll start that run this weekend against the Milwaukee Bucks.

Miami has also done well to position itself in free agency and on the trade market heading into the summer. Interest in Kawhi Leonard wouldn’t be a surprise. Here’s a look at three reasons why it would make sense.

Jimmy Butler and Kawhi Leonard would be that star pairing

We’re talking about two of the best three-and-D wings in modern Association history. As good has Paul George has been throughout his career, the All-Star’s impact on the defensive end of the court can’t be compared to what we’ve seen from Butler in recent years. Meanwhile, Leonard is the single-best perimeter defender of his era.

Offensively, it would be about as dynamic as it gets. Despite dealing with COVID-related issues during the regular season, Butler averaged 21.5 points, 6.9 rebounds, 7.1 assists and a league-best 2.1 steals per game. He also shot 50% from the field. Leonard’s ability to hit the three-point shot (40% this season) would also mask Butler’s struggles from distance (25%).

We’re also talking about two of the most valuable players in the NBA teaming up together. Miami was 33-19 in the 52 games Butler suited up in during the regular year. It posted a 7-13 record when he didn’t play. As for the Clippers, they struggled when Leonard rested — posting an 11-9 record compared to a 36-16 mark when he played.

Los Angeles entered last season with legit NBA championship hopes after adding both George and Leonard to the mix. It flamed out miserably in the playoffs — culminating in yet another premature exit. This has been the common theme for the Clippers since they became relevant on the broader league stage years back. 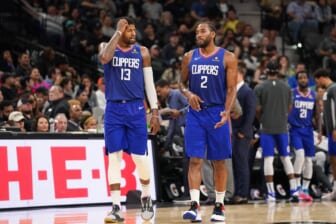 Since entering the NBA as the Buffalo Braves back in 1970-71, the Clippers have not made it to the conference finals. Despite winning north of 60% of its games in eight of the past 10 seasons, Los Angeles has not gone beyond the Western Conference Semifinals with four first-round exits mixed in. Leonard might love Tyronn Lue. He’s a Southern California native. But that level of failure doesn’t match up well with his brilliant all-around play.

LeBron James. Shaquille O’Neal. Dwyane Wade. Chris Bosh. Jimmy Butler. The list goes on and on. Outside of playing for legendary front office executive and multi-time champion Pat Riley, the draw of South Beach is real. A booming night life. Beaches that will make your jaw drop. Lavish communities for the rich and powerful.

Sure Leonard might not be about that lifestyle. He’s the most unassuming superstar in the Association. Even then, Miami has had star appeal in the past. That will make it a prime location should Kawhi Leonard opt out of his contract and consider other cities outside of Los Angeles.