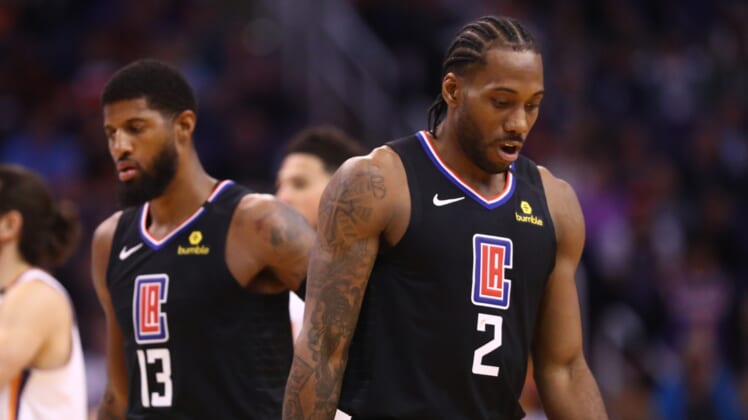 The future of former NBA Finals MVP Kawhi Leonard with the Los Angeles Clippers could very well depend on the team’s success during the playoffs this spring and coming summer.

Leonard surprised folks by not signing an extension with the Clippers following his first season in Southern California. That’s especially true after teammate Paul George quickly decided to extend his stay ahead of the 2020-21 campaign.

Now comes this report from Sam Amick and John Hollinger of The Athletic indicating that Kawhi Leonard will ultimately opt to re-sign with the Clippers.

“Yet barring a dramatic turn of events in these coming months, it’s looking like this Leonard free agency will be decidedly less dramatic,” the NBA insiders noted. “While this league has certainly taught us to expect the unexpected, the truth is that Leonard is still widely, well, expected to re-sign with the Clippers. As it stands, that’s the word from Clippers sources and rival executives alike.”

How will the Kawhi Leonard free agent pursuit play out

According to the aforementioned report, Leonard will likely opt out of his $36 million salary for the 2021-22 season in order to sign a long-term extension with the Clippers.

It makes sense. George’s extension came in at $190 million over four seasons last December. By waiting several months, Leonard could earn a bit more than that.

However, there’s a pretty big caveat here. We’ve seen some major surprises during NBA free agency in previous years. Given that the Clippers disappointed with a second-round playoff exit in Leonard’s first season with the team, there’s a chance he could take a wait-and-see approach.

The Clippers currently sit at 34-18 on the season and are the third seed in the Western Conference. They are pretty much a step below top-end title conference contenders in that of the Utah Jazz (38-12) and Phoenix Suns (34-18).

Right now, a first-round playoff matchup would come against a tough out in the Portland Trail Blazers. Los Angeles is 2-0 on the season against Portland.

As for Kawhi Leonard, he’s churning out another great campaign thus far in 2020-21. The star forward is averaging 25.8 points, 6.7 rebounds and 5.0 assists on 52% shooting from the field through 43 games.