How the wheels have come off Kansas City Royals’ rebuild 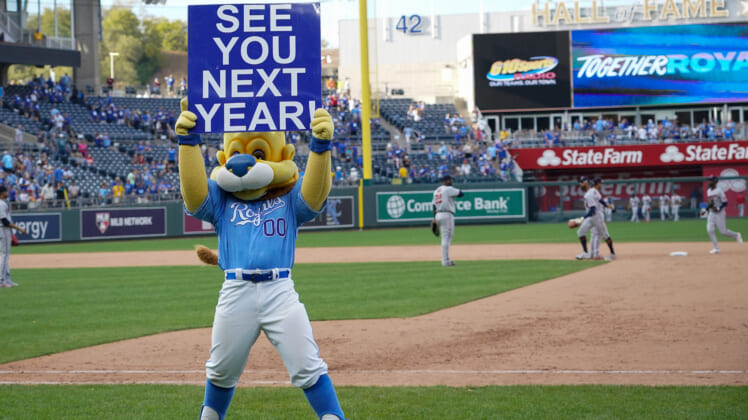 The Kansas City Royals recently concluded their fifth consecutive losing season. In the midst of a retool-turned-rebuild after the team’s 2015 World Series championship, the Royals’ find themselves in a funky spot.

In 2019, there was plenty to be optimistic about with this franchise. Since that time, said positive energy has significantly waned to the point where their rebuild is on the brink of failure.

Here’s why the Royals are in trouble.

Kansas City Royals’ offense has been staggered in recent memory

Two years ago, the eminent aspect of this ballclub was its offense. Whit Merrifield was a contact machine. Jorge Soler was an overwhelming power hitter. Hunter Dozier was flat-out raking. Adalberto Mondesi, Ryan O’Hearn and Nicky Lopez had their moments. When healthy, Salvador Perez was the veteran leader. It’s a much different story in the present.

Perez had an MVP-caliber season at the plate, Lopez hit .300 and Andrew Benintendi was respectable this season. That’s about it. Merrifield has regressed when it comes to getting on base with frequency. Soler was moved at the MLB trade deadline. Dozier has become a boom-or-bust hitter. Mondesi is struggling to get on base. Michael A. Taylor is a reliable center fielder but a streaky hitter.

The positives and negatives at-best offset each other. The Kansas City Royals’ offense finished the regular season 24th in MLB in runs (686) and 25th in OPS (.702). They could get people on base with their contact, but they did little with those opportunities on the basepaths. Outside of Perez, there was no consistent power threat, which led to too many strikeouts and runners left on base.

This unit is in a holding pattern. There’s minimal upside at the big-league level, and the offense relied too heavily on veteran players who likely won’t replicate their 2021 campaigns (Perez) or could potentially be elsewhere next season (Merrifield via trade or Carlos Santana via free agency).

Starting pitching has been the Royals’ chronic weakness, one that has worsened in every passing season.

A year ago, there were some glimmers of hope in this aspect of the Royals’ operation. Brad Keller was superb while Brady Singer and Kris Bubic held their own as rotation fixtures. This season Keller and Singer struggled mightily to keep runners off the basepaths, limit damage and simply get their offerings across the plate. They posted respective ERAs of 5.39 and 4.91 and WHIPs of 1.66 and 1.55.

Kubic was respectable but also saw time out of the bullpen. Manager Mike Matheny’s best starting pitcher, Danny Duffy, was moved before the MLB trade deadline after suffering an arm injury.

Now, young-right hander Carlos Hernandez found tremendous success in his brief time starting this season, and Daniel Lynch got invaluable reps. All in all, though, this is a raw rotation with no veteran leader and a heap of uncertainty moving forward. Can Hernandez build on his 2021 success, or will he take a step back after an encouraging season like Keller just did?

There are plenty of former top prospects and/or pitchers with upside in the organization. The issue is for every individual who progresses there’s another that takes a step back while the team is out of realistic playoff contention in the summer. There’s a negation for every positive development on this pitching staff. A collective 4.97 ERA speaks for itself.

It’s not all doom and gloom for the Royals. Some of their top prospects like left-hander Asa Lacy and position players Bobby Witt, Nick Pratto and Kyle Isbel could potentially be part of the big-league team in 2022.

At the same time, does a couple of them tearing up the big-league scene make a tangible difference, especially if the Royals continue to be a team with scattered reliability across the board? If the answer is yes, will the results be impactful enough to the point where the Royals are a .500 team?

The AL Central is arguably the worst division in MLB, as one team had a winning record in the five-team cluster this season. Here’s another way of looking at it: the Royals haven’t made progress or sustained plausible levels of play in a lacking division. They went 74-88 in a season that saw the Minnesota Twins collapse, the Cleveland Indians fall to mediocrity and the Detroit Tigers continue to rebuild.

Speaking of those teams, the Twins have the talent and payroll flexibility to at least get back in the AL Wild Card race, and the Tigers made considerable progress with a sturdy rotation and power bats this season. Kansas City enters the offseason with a potential last-place outcome in its future barring a transformative offseason and/or team breakthrough.

The day of reckoning has not arrived for the Kansas City Royals, but it’s on the horizon if they don’t start climbing the ladder.