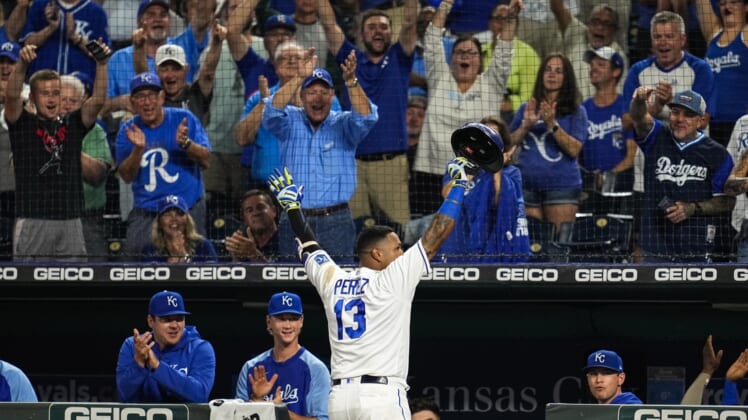 Salvador Perez tied a club record with his 48th home run of the season as the host Kansas City Royals defeated the Cleveland Indians 10-5 on Wednesday.

It was also the 200th home run of Perez’s career. He leads the majors in home runs and also in RBIs, after driving in three runs to run his total to 121.

But Perez wasn’t around long. The Royals’ broadcast team tweeted in the middle of the second inning that Perez was “helped out of the dugout during the commercial break towards the tunnel. He’s hurt and out of the game.”

However, Perez came to bat in the bottom of the inning and struck out. He was replaced in the third by Cam Gallagher. It was announced later that Perez left with a right ankle sprain.

With the game tied at 5-5, the Royals scored three runs in the seventh off losing pitcher Nick Wittgren (2-9). Hunter Dozier’s two-run triple was the key blow, and the third run came across on a wild pitch.

Greg Holland (3-5) picked up the win with two perfect innings of relief.

The Indians scored a run in the first. Myles Straw led off with a sharp single to right. He advanced on a ground out, stole third and scored on a sacrifice fly by Jose Ramirez. It was Ramirez’s 100th RBI of the season, five off his career high from 2018.

The lead didn’t last long as Whit Merrifield led off the bottom of the inning with a hustle double to short left-center. It was Merrifield’s 40th double of the season, giving him his second season with at least 40 doubles and 40 stolen bases. Nicky Lopez walked before Perez lined one 439 feet to center.

The Royals were back at it in the second. Michael A. Taylor led off with a double and scored on Kyle Isbel’s single. Merrifield then hit his second double, scoring Isbel.

The Indians got a run in the third. Austin Hedges singled and Oscar Mercado walked. With one out, Amed Rosario doubled in Hedges, but the Indians left runners on second and third.

Royals starter Daniel Lynch had to leave the game in the fourth inning when he was struck by a line drive off the bat of Austin Hedges. The Indians scored two runs in the inning.

The Indians tied it in the fifth on an RBI double by Yu Chang.

The game marked the 4,000th victory in the history of the franchise, which dates to 1969.