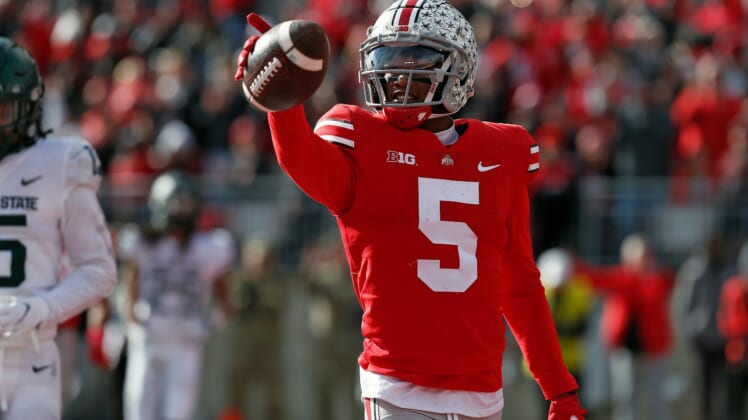 Since trading Tyreek Hill, the Kansas City Chiefs arguably don’t have a No. 1 wide receiver. They may be working on a trade to change that in the 2022 NFL Draft. Specifically, a rumor has emerged of their interest in selecting Ohio State’s Garrett Wilson in the first round, but they’ll have to move up from pick 29 to do so, thus the trade idea.

Which, after receiving five draft picks in the Hill trade, general manager Brett Veach should have plenty of ammo to make some moves.

The trade rumor originates from a Kansas City radio station, 610’s Fescoe In The Morning.

“I got a call last night from somebody who floated this rumor out that they heard about the Chiefs,” Fescoe said. “And it was that the Chiefs trading both 1’s and their second-round picks — whether it’s 40 or 50, depending on how high they want to move up — to get to around Top 5 in the Draft. Now to get to Top 5 in the Draft, they would have to trade their two 1’s and that first second-round pick. If they want to get to 7-8 in the Draft, they can trade their two 1’s and their second second-round pick and move up to there. And the target, from what I heard yesterday, appears to be Garrett Wilson, the wide receiver out of Ohio State.”

Basically, while it’s an exciting thought, rumors such as these should be taken with a grain of salt leading up to the draft.

Do the Chiefs need to target Garrett Wilson?

One could make the case that the Chiefs don’t have a true No. 1 receiver at their disposal, but on the other hand, maybe they do. JuJu Smith-Schuster has proven more than capable, as shown by his second season in the league, racking up 1,426 receiving yards and seven touchdowns. The thought is, JuJu may be able to get back to that production paired with Patrick Mahomes in an offense that also features Tracis Kelce.

Marquez Valdes-Scantling isn’t a bad secondary option either. There’s said to be a lot of depth at wide receiver in the 2022 NFL Draft class, is making such a bold trade up the board necessary for a pass-catcher, when an immediate contributor can likely be found in the later rounds?

The issue is, that a player of Wilson’s caliber may not be able to be found later on. If the Chiefs have tabbed Wilson as a top draft target, possibly even one who can do many of the same things Hill could as a downfield burner, then maybe a trade up makes the most sense.