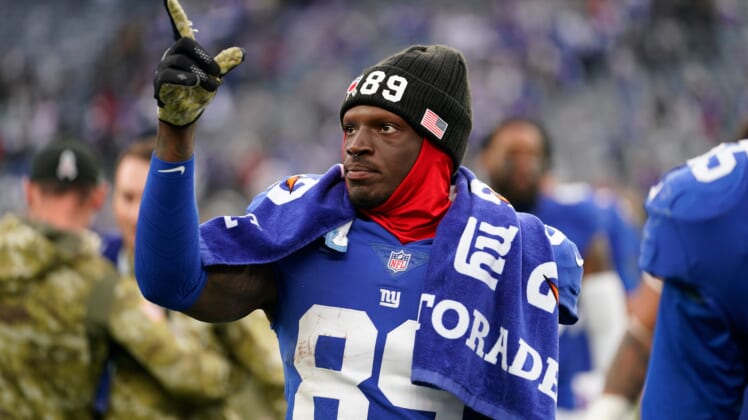 If another NFL team is going to pull off a Kadarius Toney trade with the New York Giants, it seems a general manager will need to have a huge offer on the table for anything to happen.

Pat Leonard of The New York Daily News reported Friday that New York was looking to trade Toney just a year after selcting him with the 20th pick in the 2021 NFL Draft. Amid his absence from voluntary practices, the 6-foot receiver’s tenure with the Giants seemed like it might be coming to an end.

The 2022 NFL Draft would offer New York a perfect opportunity to move him. With a new regime leading the way, general manager Joe Schoen could flip Toney for draft picks and bring in his own players. However, a deal might not be as likely as it first appeared.

ESPN’s Jordan Raanan spoke to multiple NFL executives to gain perspective on where Toney stands in New York. Based on conversations around the league, the Giants still view their 2021 first-round pick as a “valuable asset” and want a significant return for him. Because of the asking price, many think it’s unlikely a trade happens.

The information backs up reporting from Ralph Vacchiano of SportsNet New York. The Giants’ reporter shared that while Toney is avaialble for trade, Schoen is listening to trade inquiries more so than calling around the league trying to find a deal.

Toney’s talent is undeniable. He proved to be a dangerous player in the open field as a rookie, flashing the skills to be a playmaker for years to come. However, some mautrity issues, injuries and an on-field punch represented negative storylines in his first NFL season.

Still under a rookie contract for the next three years with a fifth-year team option, the Giants likely won’t part with Toney unless a Round 2 pick is offered. Given the depth at wide receivers in the 2022 draft class, a deal in the next few days seems doubtful.