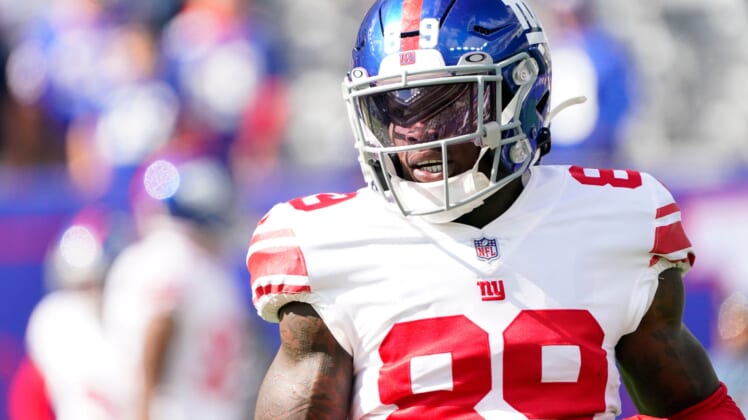 According to Pat Leonard of the NY Daily News, GM Joe Schoen has been busy making calls to see what the second-year pro would fetch in a trade. After playing in just 10 games, starting four of them in his rookie season, it’s unknown just how much compensation the Giants are looking for. Nevertheless, Toney flashed some big-game talent which will surely lead to several competitors interested in a trade.

The Detroit Lions already made a splash this offseason by signing DJ Chark to a deal worth up to $10 million. They also have Amon-Ra St. Brown who impressed as a rookie, but at the start of the offseason wide receivers coach Antwaan Randle-El made it publicly known his desire to add at least two playmaking pass-catchers this offseason.

Chark was a nice start, Toney could be the finishing touch, giving Jared Goff a much improved receiving corps to work with in his second season in town. The Lions certainly have the draft capital to trade, with four picks in the top 66 and could provide a perfect trade partner for the G-Men.

Moving on from Davante Adams created a lot of opportunities I guess one could say on the Green Bay Packers’ depth chart. With few established options aside from Randoll Cobb, the Packers are a sure bet to add a few more targets for Aaron Rodgers over the next two weeks. Perhaps they had Toney graded highly a season ago?

Either way, Toney could inject a lot more speed into the Green Bay offense. Like the Lions, the Packers have four picks in the top-60 selections and have a definite need for talent in the receiver room.

Everyone knows by now the New York Jets have a strong need for a top wide receiver. Who knows whether Toney can be a WR1, but he at least showed a glimpse of the possibility against the Dallas Cowboys in 2021. Though he didn’t even start the game, Toney hauled in 10-of-13 receptions for 189 yards in Week 5, flashing his game-breaking ability.

The Jets can plug Toney into their top-three receiving group and hope to see him thrive with Zach Wilson as they both grow over under their rookie contracts.

If Deebo Samuel really wants a trade from the San Francisco 49ers, they should consider giving Big Blue a call. Toney has the ability to do a lot with a little, much like Samuel does. He may not ever be used as a bully out of the backfield, but they can get his speed involved on end-arounds and whatever else Kyle Shanahan has up his sleeve.

Toney fits the profile of what the 49ers generally covet from their receivers and he’d come at a much lower cost than committing to Samuel for the next several seasons.

Trading Tyreek Hill allowed the Chiefs to save a ton of money on their salary cap while getting loads of draft capital in return. They did sign JuJu Smith-Schuster and Marquez Valdes-Scantling, but there’s still a belief they want more than just those two to pair with Mecole Hardman.

The 2022 NFL Draft will present them plenty of opportunities to do just that, but the Chiefs have never had issues buying low on a player who maybe has some locker room concerns, which could be the case with Toney. He didn’t show up to voluntary camp this week with the Giants for whatever reason, and now the team wants to move on from him altogether. Perhaps the Chiefs are a natural fit.