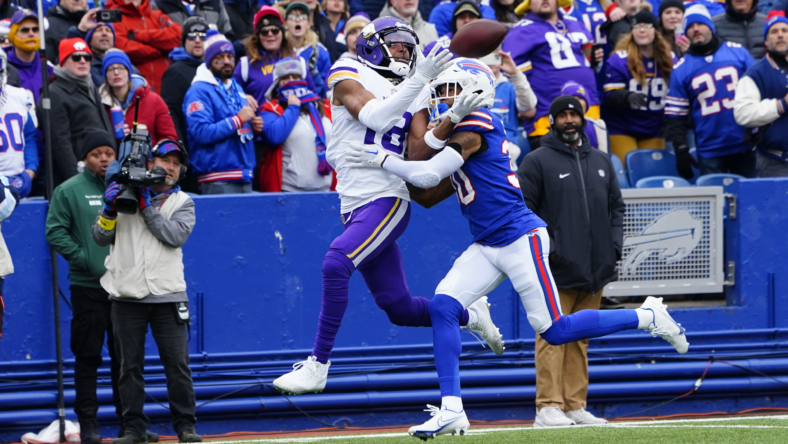 The Minnesota Vikings avoided losing what would have been just their second game of the season against the Buffalo Bills on Sunday, in large thanks to the excellent effort from Justin Jefferson. The talented third-year pro has already broken several records in his young NFL career, but his latest performance has added another impressive accomplishment to his résumé.

Jefferson hauled in 10 receptions for 193 yards and a touchdown. It’s a new career high for Jefferson, topping the 184 yards he gained against Green Bay in Week 1. While the incredible catches, the touchdown, and the win were all fantastic, it was the yardage that puts the 6-foot-1 wideout in the NFL record books.

With his latest effort, Jefferson now holds the NFL’s all-time record for most games with 100 or more receiving yards in a player’s first three seasons. Jefferson now has 20 such games through his first 42 career games, meaning the electric wideout goes over the century mark on roughly one of every two games he’s played thus far.

Jefferson now has six games with 100 or more receiving yards on the season. Keep in mind the Vikings still have eight games to play, giving him a chance to shatter the record.

Ironically, the two players Jefferson passed have direct ties to the dynamic receiver. Former Viking Randy Moss and current free agent Odell Beckham Jr. (who also went to LSU) were the other two pass-catchers tied with 19 career games topping 100 yards through their first three seasons in the NFL.

Perhaps the scariest part is that the Vikings operated a run-first offense during his first two seasons, and now Kevin O’Connell is opening things up a bit more. It’s possible Jefferson is only getting started as he gains experience.

While what we’ve already seen from the 23-year-old former LSU star has been outstanding, his career is only getting started.

Jefferson makes catch of the century to keep Vikings rolling

OK. We were already thoroughly impressed with Jefferson’s work on the day, but then the Griddy master outdid himself late in the fourth quarter with the game on the line.

Facing a 4th-and-18, with the Vikings needing a big play more than ever, it was, you guessed it, Jefferson who stepped up. And step up, he did.

Jefferson climbed the ladder to snatch a phenomenal one-handed grab away from the Bills’ defensive back for what might be the best catch we’ve seen this season.

Crazily enough, the catch was similar to one Stefon Diggs made earlier in the game, but this one came with a defender locked into coverage, as well as it being a clutch catch. If we’re ranking the two, Jefferson gets the easy edge.