Justin Jefferson vs. NFL’s all-time greats: Will the wide receiver become a legend?

At this point, no one can deny who the best rookie wide receiver in the NFL was last season. Without a question, it was Justin Jefferson of the Minnesota Vikings. But just how good was his first year? And how does it compare to the NFL’s all-time greats?

Here’s a quick look at some of the top-performing rookie wide receivers in 2020.

As you can see, Jefferson led rookie wideouts in all listed categories except touchdowns. Only Laviska Shenault Jr. of the Jacksonville Jaguars at 73.4% had a better catch ratee than Justin Jefferson among all rookie receivers with at least 40 targets. While there are several receivers not listed who had more yards per reception, due to their target quantity being much lower, it makes sense for their average to be higher.

It’s safe to say, Jefferson was the best rookie wide receiver in the NFL in 2020. That doesn’t mean he’ll have a better career than any other receiver in the 2020 NFL Draft class, but for now, he’s off to a great start.

Selected five spots ahead of Justin Jefferson, CeeDee Lamb showed why the Dallas Cowboys were enamored with his talent, finishing just shy of a 1,000-yard season. Lamb is undeniably a playmaker and would likely have been just as good a fit in the Vikings’ offense. He even could temporarily help solve their special teams woes, having returned both a kick and a punt for touchdowns as a rook.

However, as a pure receiver, it’s hard to argue against the immediate impact Jefferson had in his first season, leading rookies in several categories. I don’t think Vikings’ general manager Rick Spielman has any regrets that Jefferson fell instead.

Standing at 6-foot-4 inches tall, Higgins was a great addition for fellow rookie Joe Burrow’s introductory season. Finishing third behind Jefferson and Lamb in rookie receiving yards, Higgins was more than worth the 33rd pick the Bengals selected him with.

Higgins uses his large frame to his advantage, making it tough for most defenders to cover him one-on-one. While his size may be unmatched by his fellow 2020 rookie class, when it comes to burning defenders using raw route-running abilities, Jefferson’s agility is lethal. Higgins is a few inches bigger than Jefferson, but also not as quick or polished as a receiver.

Playing a major role for what was an undefeated team most of the year, as the 49th pick, Chase Claypool was one of the biggest steals in the draft. Eternally searching for a new No. 1 receiver, Pittsburgh may have found one with Claypool.

Running a 4.42 40-yard dash and measuring in at 6-foot-4, 238 pounds, Claypool is big, fast, and strong. Few competitors can keep up with Chase on the gridiron. As a rookie, he scored more touchdowns than any other wideout.

Claypool and Jefferson aren’t a simple comparison in that JJ is more finesse, where Chase is more like a wide receiver in a tight end’s body, like Kyle Pitts. Pairing the two 2020 rookies together would be unfair as they would be perfect complementary pieces to one another.

As a pure receiver, Jefferson may win more one-on-ones in situations where he shakes his defender. But Claypool’s athletic profile is freakish and if there is a touchdown to be had in the red zone, give me Claypool’s size and strength all day over the Rookie of the Year runner-up.

With that said, Jefferson’s knack for gaining more yards than expected after the catch displays a never-die-easy mentality. If he continues those efforts, Jefferson should have no issues staying in the top-five of NFL receiving yards leaders year in and year out.

While they may be grouped together here, Jerry Jeudy and Brandon Aiyuk are very different players. Especially when compared to Justin Jefferson. However, when taking a closer look at their rookie seasons, they may not be that far apart.

Like Justin Jefferson, Jeudy was regarded by some as the best receiver prospect in the 2020 draft class. Selected 15th overall by the Broncos, Jeudy’s season was undoubtedly impacted by Denver’s lackluster seventh-worst passing offense. But with a catch rate of just 46%, it’s possible Jeudy needs to work on his catch concentration skills as well.

Whether Jeudy will have a bigger impact in year two will largely depend on the quarterback play in Denver. Right now, it’s either Drew Lock or Teddy Bridgewater. But if a certain MVP gets traded to the Broncos, things could change quickly.

A comparable scenario applies to Brandon Aiyuk in the Bay Area.

Measuring under six feet, Aiyuk isn’t an ideal outside receiver teams typically rely on for their go-to target. Yet, his ability to either make defenders miss by using his athleticism or by running through them, gives him game-breaking capabilities.

Compared to the other five rookies we’re highlighting, Aiyuk had the second-most yards per game. Available for just 12 games, Aiyuk’s per-game averages would have added up to just under 1,000 yards for a full season.

Fans outside of San Francisco may not recognize Aiyuk to be a top receiver from last year’s draft class but his body of work in his first season was quite impressive. Especially when considering Aiyuk had Jimmy Garoppolo throwing him the ball for five games, Nick Mullens for six, and C.J. Beathard for one.

With a full season split between Trey Lance and Garoppolo, hopefully Aiyuk can find some consistency and build off a strong, but underrated rookie campaign.

How does Justin Jefferson compare to past Rookie of the Year wide receivers?

With his Week 13 performance, Justin Jefferson made a name for himself in the record books by becoming one of five receivers to gain over 1,000 yards in their first 12 games in the NFL. Three of those players won Offensive Rookie of the Year.

Here’s a look at the stats of those who won Offensive Rookie of the Year.

Odell Beckham Jr’s rookie numbers were sensational considering he only played in 12 games. Randy Moss was unstoppable. It’s no surprise he holds both the rookie receiver touchdown record on top of being the NFL’s all-time single-season touchdown leader. Moss is a fixture on the Mount Rushmore of all-time greats at wide receiver.

During his first year, Jefferson finished with more receiving yards than any other rookie since 1960. Even with the incredible stats Justin Jefferson put up, it still wasn’t enough to beat out Justin Herbert for the 2020 Rookie of the Year award.

It feels wrong to try and compare Randy Moss to Justin Jefferson in any sense, but we’re just looking at numbers as a rookie here. Other than the obvious Minnesota Vikings connection, several other factors are linking their rookie seasons together.

Both players entered a high-powered offense after slipping much further than they should have in the draft and both instantly became the team’s deadliest playmaker outside the numbers.

When Moss arrived as a rookie in 1998, few expected him to suddenly become the team’s go-to receiver. Cris Carter was coming off his fifth-consecutive Pro Bowl berth and just led the NFL with 13 receiving touchdowns the year before. Yet Moss entered the ship and took the league by storm. 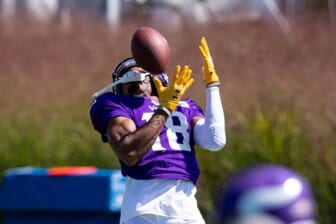 Crazy enough, Jefferson actually finished with more yards as a rookie than Moss had. And at 70.4% compared to 55.6%, Jefferson’s catch rate as a rookie is better than any season Moss ever put up. But those touchdowns, nobody could match the Randy Ratio and his 17 scores in 1998.

We’ll stop the comparisons to one of the WR GOATs here as Jefferson has a long way to go, but as a rookie, believe it or not, he actually did best Moss in a few categories.

As a rookie, Odell Beckham Jr. instantly became a household name. As if the catch wasn’t enough, ODB put up astronomical stats as a rookie. In just 12 games, Beckham had 1,305 yards and 12 touchdowns. Averaging 108.8 yards per game, those numbers translate to over 1,740 for a 16-game season. Which would have broken all rookie records.

Both playmakers hail from Louisiana and both translated their early success into scholarships at LSU. In the NFL, the former LSU Tigers have been two of the most dominant rookie receivers in NFL history.

Comparing stats, Beckham’s catch rate was just .4 percentage points lower than Jefferson’s. Beckham has a reputation for making big plays at the pro level, yet Jefferson’s 15.9 yards per reception beats Odell’s career-best 15.1 put up in his second year.

Jefferson compares favorably to a playmaker such as ODB, but he’ll have to prove he can perform consistently throughout his career to continue down a similar path as one of the game’s most productive receivers of our generation.

You didn’t think you’d make it through an entire Justin Jefferson article without reading a blurb about Stefon Diggs, did you? Due to how everything transpired, Diggs and Jefferson will always be compared to one another throughout their careers. It’s not necessarily fair to either of them, but that’s sports.

There’s no doubt both teams did extremely well in the Diggs trade. The Buffalo Bills added a legitimate No. 1 wide receiver and it’s helped turn Josh Allen into a top-five starting quarterback in the NFL. Meanwhile, the Vikings added a No. 1 receiver who is younger, cheaper, and less of a problem in their locker room, on top of additional draft picks.

It’s also unfair to compare Diggs’ best season to Jefferson as a rookie. None of Diggs’ five other seasons can compare to the year Jefferson had. If his rookie season is just the start of what’s to come, Jefferson has the potential to be considered the best receiver in the NFL.

Which is where some might place Diggs right now after the season he had. Diggs even recently revealed he played through a torn oblique in the Bills’ playoff run.

The Vikings didn’t want to let a fan favorite like Diggs leave unless they could find a way to replace his production. They had no indication that Jefferson would come in and immediately provide a spark to the offense, but they are lucky it worked out the way it did. The former LSU Tiger has quickly become beloved in Minnesota, he’s even helped Adam Thielen become a better dancer.

Both organizations made the right moves for their immediate future, but nobody expected either player to have such a strong impact in their first 16 games with their new teams.

The Minnesota Vikings have had several great receivers wear purple and gold in their 60-year history. How does Justin Jefferson’s season compare historically to the Vikings’ best individual statistical seasons?

Obviously, despite Jefferson’s early success, he is nowhere close to having one of the best seasons ever for a Viking wide receiver yet. But when you consider we’re comparing Jefferson’s stats as a rookie with other Vikings’ best seasons, the numbers are quite impressive.

We’re not going to get him fitted for a gold jacket quite yet, but if his first season of highlights is any indication of future success, he can start by earning a spot in the Vikings Ring of Honor.