Juan Soto to the San Francisco Giants, how a trade might work 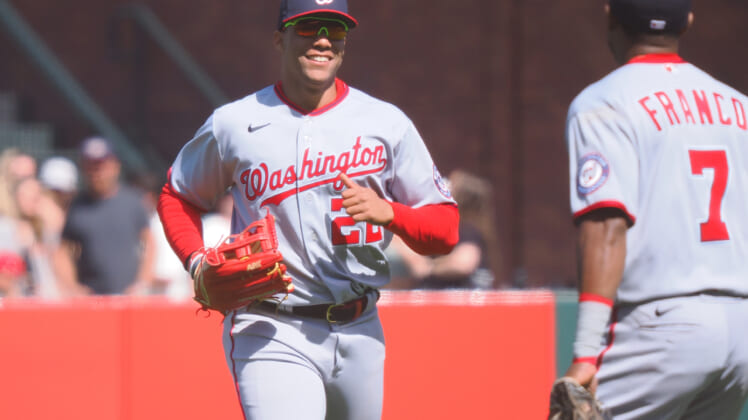 There’s a chance that a Juan Soto trade from the Washington Nationals could happen some time soon.

Soto turned down a 15-year, $440 million extension offer from the last-place Nationals recently. This led to the team starting to engage in talks with other teams ahead of the Aug. 3 MLB trade deadline.

While the San Diego Padres, New York Mets and New York Yankees are the three teams that have been most bandied about in trade talks surrounding Soto, a California-based organization makes sense.

That comes in the form of the San Francisco Giants. They continue to have success under manager Gabe Kapler despite being without a true superstar. San Francisco has also been linked to pending free agent Aaron Judge of the Yankees.

Front office head Farhan Zaidi has been very methodical with his approach to both contracts and trades.

However, that must change if San Francisco is going to compete with the free-spending Los Angeles Dodgers in the National League West moving forward. With that in mind, we look at how a Juan Soto trade to the Giants could look like.

Projecting a Juan Soto trade to the San Francisco Giants

Per MLB.com, San Francisco boasts the 11th-best farm system in the game. That’s above average. However, it sits behind the rival Los Angeles Dodgers (fifth) in this category. While the Dodgers have not yet been linked to Soto, we expect that to happen in short order.

What does this mean? If there’s going to be a bidding war for Soto’s services (there is), the Giants will likely have to offer up quantity in a package. They had four top-100 prospects heading into the 2022 season in that of Marco Luciano (13th), Joey Bart (31st), Luis Matos (63rd) and Kyle Harrison (75th).

A number of these prospects would have to be offered up for Soto outside of Bart. Washington believes it has a catcher of the future in the 22-year-old Keibert Ruiz who was acquired in the Max Scherzer blockbuster with the Dodgers ahead of last season’s MLB trade deadline.

This is quite the load of prospects for Washington to rebuild the 10th-worst farm system in baseball. In fact, it has just two top-100 prospects in Cade Cavalli and Brady House.

It starts with Luciano. The 20-year-old Dominican product is seen as a five-tool prospect. Thus far this season in high Single-A ball, the shortstop is hitting .288 with eight homers and 17 RBI in 40 games. He also boasts a solid .867 OPS.

Also playing in Single-A Eugune, Harrison has been absolutely dominant against lower-level competition. A third-round pick back in 2020, the lefty is pitching to a 1.55 ERA an 1.000 WHIP while striking out 59 batters in 29 innings. That’s just ridiculus.

While both Luciano and Harrison are ways away from the Majors, they can headline a package for someone of Soto’s ilk.

Ramos is a bit different in that he’s had a cup of coffee with the Giants this season and could be Soto’s direct replacement in the outfield. While struggling with the big-league club, Ramos showed what he had to offer in the minors last season. That included the Puerto Rico native belting 14 homers in 116 games.

As for Corbin’s involvement in a potential Juan Soto trade to the Giants, it woud be all about San Francisco picking up the remainder of his ridiculous six-year, $140 million contract. The veteran is owed combined $59 million in 2023 and 2024. He’s also been a downright disaster in the nation’s capital since the start of last season.

In reality, picking up Corbin’s contract would be in lieu of the Giants adding more prospects to the mix. Meanwhile, a rebuilding Nationals team unloads one of the worst contracts in baseball.

A core of Juan Soto, Joc Pederson, Wilmer Flores and Joey Bart might not be enough to compete with Los Angeles’ lineup. But with the Giants’s stellar pitching, it would narrow the gap big time.