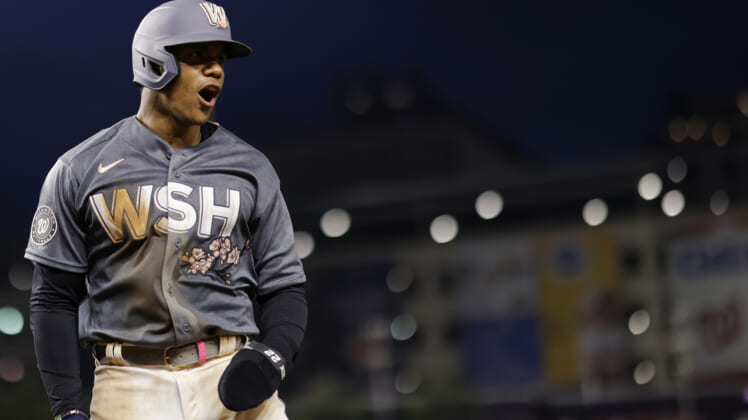 Washington Nationals outfielder Juan Soto is one of the best players in baseball and on pace for a Hall of Fame career. Amid uncertainty surrounding Nationals’ ownership, the NL MVP candidate is now being floated in MLB trade rumors.

According to Buster Olney of ESPN, rival MLB executives believe the Nationals might be motivated to trade Soto this season. The 23-year-old outfielder is still under contract through 2024, but the belief is his contract demands could make a potential sale of the team more difficult.

Soto reportedly turned down a 13-year, $350 million contract extension this offseason. While it would have made him one of the highest paid MLB players, it also would have been a below-market deal. Furthermore, Soto is represented by agent Scott Boras and that means the star outfielder will likely test free agency when first eligible. With the Nationals not close to competing, a blockbuster deal is at least possible.

Let’s examine four potential landing spots for a Juan Soto trade and what it might cost to acquire him.

Following the retirement of Buster Posey, the San Francisco Giants are a perennial contender without a face of the franchise. This is also a team that lacks an elite bat in its lineup, something that could prove to be an issue long-term. Farhan Zaidi likes making smaller trades to fill out his roster, but the opportunity to land Soto would be a franchise-changing move. 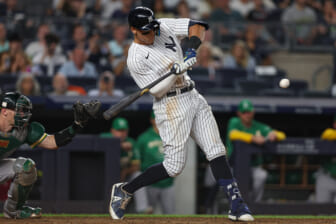 San Francisco unloads the top of its farm system. Marco Luciano (No. 11 in MLB Pipeline’s Top 100), Luis Matos (59th in top 100) and Kyle Harrison (71st) headline a package. The Giants would also likely need to attach Joey Bart and Mike Yastrzemski, providing the Nationals with cheap MLB talent under team control through 2025.

There’s a possibility that Washington isn’t interested in including Corbin’s contract at the risk of it decreasing what it receives back in return. However, the Giants should be willing to take it as part of a sweetener.

San Francisco has the money to afford the hit, that’s the benefit of the franchise having very few big contracts on its long-term payroll. As for Corbin’s role, the Giants could see if their pitching coaches can figure anything out with him to be a fill-in starter.

Jerry Dipoto loves nothing more than making blockbuster trades. The Seattle Mariners likely have one superstar with Julio Rodriguez, a future MVP threat. However, Seattle could really benefit from adding a co-star in the outfield. What better way than to pair two Dominican stars in a market filled with excitement for this club’s future.

The proposed deal is more than what San Francisco gives up in a deal. However, part of the reason for that ins Seattle doesn’t take back a bloated contract. Additionally, two of the young pieces attached in this deal aren’t as well-regarded as before. While it would be a substantial price, the Mariners get a future Hall of Famer outfielder by paying it.

Using BaseballTradeValues.com, this deal comes out to a +30.5 median gain for the Nationals. Admittedly, Jarred Kelenic and Matt Brash have likely lost some of their shine. Kelenic was sent down to the minors after posting a .173/.256/.338 slash in his first 123 games, but he’s an incredibly talented 22-year-old with the tools to become a star. Brash’s fastball-slider combo is devastating, but the command is a huge work in progress. 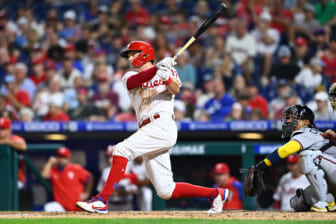 Lewis would provide Washington with an immediate replacement in the outfield and is under contract through 2025. Marte is Seattle’s No. 1 prospect and No. 9 overall in the top 100. He is the headliner of the deal and could become a star for the Nationals. Meanwhile, Kirby profiles as the future ace of Washington’s rotation.

The Toronto Blue Jays already made a run at Jose Ramirez this year. It’s fair to say the organization was willing to give up a lot for the All-Star third baseman. Truth be told, whatever it offered to the Cleveland Guardians won’t even sniff what it would take to land Washington’s franchise player.

Fortunately, the Blue Jays have a farm system rich with talent at the top. Of course, that’s only going to be part of the trade package. Realistically, the Blue Jays will also need to include some of their MLB talents to have any shot at something happening.

From Washington’s perspective, Moreno is a better long-term catcher than Keibert Ruiz and he could develop into an All-Star selection at the position. The Nationals also build a future middle infield with Moreno and Groshans. On top of it, Ricky Tiedemann and Nate Pearson are upside arms who could figure into the starting rotation before long.

This would still leave the Blue Jays with a future where both Vladimir Guerrero Jr. and Soto need record-breaking contracts. It will be costly financially, but it’s worth it to have two of the biggest MLB stars in one lineup.

We arrive at the New York Yankees. The organization received plenty of criticism for not adding a star shortstop this offseason. Things have worked out and the long-term payroll flexibility might exist to make a run at Juan Soto, ideally before he tests the open market.

There’s no question about the fit. An outfield with Soto, Aaron Judge and Giancarlo Stanton could be one of the best in recent memory. It would also be wildly expensive, especially with Joey Gallo on the bench, but the upside merits the cost.

New York is only trading Anthony Volpe if it gets a superstar with multiple years of contract control back. He’s a must for Washington to even consider picking up the phone. The hype surrounding Jasson Dominguez has died, but he’s still a teenager and worth pairing with top prospects Oswald Peraza and Everson Pereira.

Gleyber Torres gets a fresh start in Washington, a change of scenery to see if his old form can be unlocked. Meanwhile, Michael King comes over in the deal as an arm to be stretched out before joining the rotation. One possibility, New York flipping Gallo in a three-team deal and sending the prospect it receives to the Nationals.