Juan Soto to participate in 2022 Home Run Derby, stats show it might help him 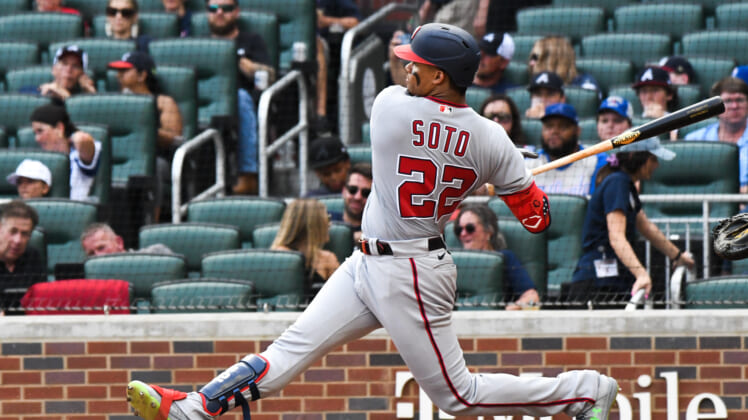 Washington Nationals outfielder Juan Soto is headed to the MLB All-Star Game for the second consecutive year, earning the appearance before his age-24 season. Not only will Soto be playing in the Midsummer Classic, he will also compete in the 2022 Home Run Derby.

Soto announced on Tuesday that he will be competing in the Home Run Derby, returning for the event after putting on a strong showing a year ago. During the 2021 homer derby, the All-Star outfielder hit the longest home run, a 520-foot blast in Coors Field.

Soto will be joined by Jorge Mejia, a coach he has a great history with from his time coming up in the Nationals’ farm syststem. In regards to why he is doing it, the 2019 World Series champion hinted his decision was influenced by the results from last season.

While Soto didn’t win the Home Run Derby last season, he put on an unbelievable show. After hitting 31 homers in the first round, he narrowly lost out to Pete Alonso with a 16-15 finish. Among players who made it two rounds, Soto hit the second-most homers.

Juan Soto stats before and after 2021 Home Run Derby

While Soto is walking at an extraordinary rate, he is on pace to have the lowest batting average and slugging percentage of his career by far. After posting a .313 batting average and .534 SLG in 2020, Soto’s numbers are down to .243 and .473 this season respectively.

While several players and plenty of fans have concerned about how swing adjustments made for the Hoem Run Derby might impact a player in the second half of the season, it wasn’t a problem for Soto.

Soto performed like an All-Star in his first 272 at-bats, delivering numbers that certainly deserved his spot in the Home Run Derby and the praise he received. After participating in the derby, though, he emerged as one of the best hitters in baseball and became an NL MVP candidate despite playing for a bad team.

It’s certainly possible that the adjustments batters make to participate in the derby have a negative influence on their performance in the second half of a season. For Soto, what happened in 2021 suggests it could be what helps him snap out of a cold streak that has limited his production this year. If he can put on a show for baseball fans and help his team more, it’s easy to see why he decided to participate.