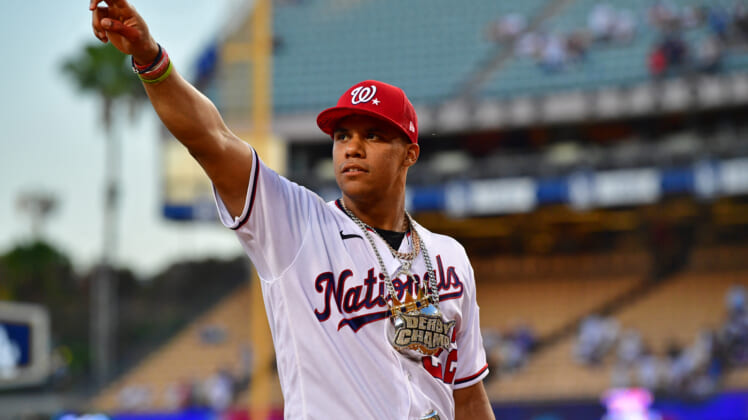 While the New York Yankees aren’t the favorite to land Juan Soto, based on one top MLB insider’s information, they still have a far better chance of landing him in a trade than the New York Mets.

In less than a week, Soto has become the Kevin Durant of MLB. When it became news that he was on the trade block after turning down a historic contract extension from the Washington Nationals, many teams in the league turned their trade deadline focus towards acquiring the 2022 Home Run Derby champion.

While there has been some speculation if the Nationals will move their starting catcher before the Aug. 2 MLB trade deadline, on a Monday edition of Sportscenter, ESPN MLB insider Buster Olney revealed that general managers around the league informed him that Soto will definitely be traded in the next two weeks. And he listed off the two early front runners to land his services.

New York Yankees could be in play for Juan Soto, New York Mets likely will get shunned

“I spoke with general managers this morning who told me that they believe, yes, he is going to be traded unless he works out a deal in the next 15 days before this year’s trade deadline. Number one, I’ve got the San Diego Padres,” Olney said. “Very motivated, they have a need, they have a really good team but they need offense. Number two, the Texas Rangers. Juan Soto is a Scott Boras client. Last winter we saw them sign Corey Seager [and] Marcus Semien — Scott Boras clients. Kumar Rocke was drafted yesterday, another Boras client.”

Since the two-time All-Star became available, there has been a bunch of rumblings that the New York Yankees and New York Mets could jump into the hunt. Since they are a pair of teams in first place and willing to shell out big bucks for big stars. While Olney believes the Yankees could be players, he has been told the Mets and Braves are unlikely landing spots due to the fact that the Nationals are not interested in sending one of their own to a division rival.

Catcher is an area that both the Yankees and Mets could use an improvement in, however, the need may be more with the National League team that resides in Flushing.