For the first time in the Joe Schoen and Brian Daboll era, there were veterans on the practice field this week as the New York Giants reported for OTAs.

One of the players that were obviously in attendance was fourth-year quarterback Daniel Jones. Last month, the Giants decided not to exercise his fifth-year option which will make him a free agent at the end of the season.

During his media session, Jones was asked how he felt about the team not picking up his fifth year. “Yeah, you know, that was certainly out of my control, out of my hands, and that’s the business part of it. I understand that,” he said. “My job is to prepare to play as well as I can, help the team win games, and that’s certainly what I’m focused on.”

Jones’s response to his contract situation was exactly how a professional athlete should respond, whether or not that’s how he truly feels. While his play has been erratic in his three years, Jones has maintained a professional attitude on and off the field.

But it obviously has to be on his mind that he does not have a contract beyond this season. That question was posed to Jones during his minicamp media session.

“I think it’s natural to think about a little bit, but I think you’re better off focusing on what you’re doing now and preparing as well as you can now,” Jones said. “So taking advantage of every day to prepare. We’re in an important part of the off-season right now, starting up our OTA practices. They’re valuable opportunities you can’t afford to miss out on, so that’s certainly what I’m focused on and working on.”

It goes without saying that the 2022 season is the ultimate prove it year for Daniel Jones. If he plays well and the Giants exceed expectations, he’ll be rewarded with a new contract or get the franchise tag. But if his play resembles what it’s been the previous three years, then his time with Big Blue will come to an end, and he’ll be looking for a backup role with another team.

The good news for Jones is that his new head coach and general manager believe in him, and he has the best offensive line that he’s ever had. The pieces are in place for Jones to have his best season as a pro. The question is, will he finally take the next leap and show that he has what it takes to be a franchise quarterback. 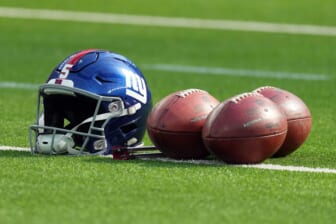