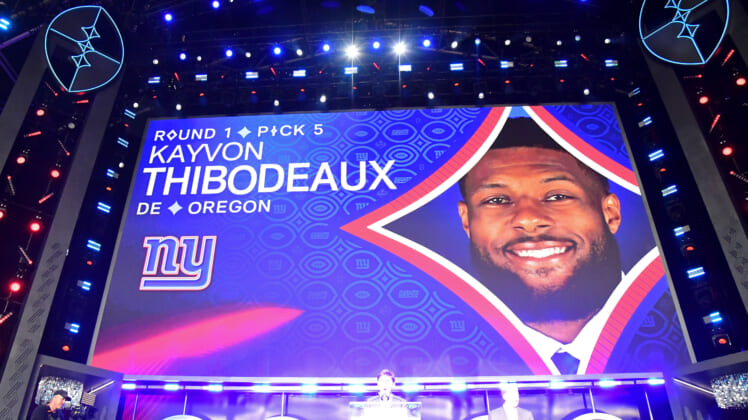 The New York Giants entered the three-day 2022 NFL Draft with a lot of needs to fill after finishing in last place in the NFC East with a 4-13 record. However, the team had the chance to get off to a strong start in this year’s event by having two picks in the top-10.

On night one of the NFL draft, the team held on to those picks and took a pair of ultra-talented players in pass rusher Kayvon Thibodeaux and offensive tackle Evan Neal. However, on the second evening of the annual event, the team expanded their draft capital by trading down twice — one deal with crosstown rival the New York Jets — and added extra fourth and fifth-round selections.

In the first, third, fourth, and fifth-round the New York Giants will have two or more picks. When all is said and done after three days of drafting, the Giants will have added 11 new faces from the collegiate ranks in the hopes of turning around their fortunes immediately in 2022.

Let’s take a look at the team’s 2022 NFL Draft selections and analyze if they addressed needs heading into the new season.

While the Giants could have gone offensive line here the team decided to take the best available player and may look back on the selection of Kayvon Thibodeaux at fifth overall as a steal. It was not long ago that the Oregon product was viewed as possibly the best prospect in this entire class. He even felt he was heading into Thursday night. However, questions about his motor dropped him further than he and his agent probably would have liked.

If Thibodeaux can prove the doubters on his focus wrong, he has the talent to turn into a Von Miller-level talent on Big Blue for the next decade.

The early run on defensive players in the first five picks helped the Giants score one of the best offensive linemen in this year’s draft class. Yes, Ikem Ekwonu was taken before Neal, and maybe he ends up being the best lineman from this group, but Neal has can’t miss talent. Because of his flexibility in playing multiple positions at a high level, he is likely to be pretty good to a great player in the NFL. You can’t go wrong with that.

The franchise entered the draft needing to make the offensive line a priority and they answered it in a big way with the 6-foot-7 monster from Alabama.

After trading down to the 43rd pick in the second round the Giants took Kentucky wide receiver Wan ‘Dale Robinson. The 5-foot-8, 178-pound talent is projected to be a slot receiver in the league. Making this choice surprising, since the team already has Sterling Shepard and last year’s first-round pick Kadarius Toney. This selection has new coach Brian Daboll’s fingerprints all over it.

While Robinson is undersized, he has big-play potential when the ball is in his hands. It’s not a terrible pick, but taking Robinson may have been a bit of a reach since the defensive secondary is a greater need for the organization.

North Carolina guard Joshua Ezeudu was the New York Giants’ first pick in the third round. Ezeudu is a nimble player who moves well and is also a sensible pick — like Robinson — for the offense Daboll will look to run in 2022. What makes this a solid choice is the team once again prioritized trying to fix a major weakness in their O-line. 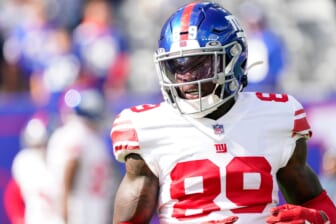 Ezeudu projects to be a left guard at the next level and like will have a chance to compete with Shane Lemieux, and Max Garcia for the job in camp. If Ezeudu wins the spot fair and square in camp, this picks grade improves to an A.

While the Giants waited longer than they probably should have, the team finally drafted a cornerback with their second third-round pick — No. 81. LSU’s Cordale Flott is a smidge undersized for the position at 6-foot-1 and 175 pounds, but he is tough and a reliable tackler. At this point, he doesn’t project to be a starter in the league but could turn into a very valuable nickelback in the slot. It may not be a major need for the team, but still an area they have not gotten enough out of.

With their first selection in the fourth round, the organization took a player that actually could be better at the pro level than he was in college. San Diego State tight end Daniel Bellinger is a good athlete who has the talent to be an all-around contributor at the position — unlike Evan Engram. There is a view that Bellinger was miscast in San Diego State and underutilized after tabulating just 31 catches for 357 yards in 2021. It is up to the Giants to pull that notable potential out of him.

With the 114th pick, the team once again went secondary with Iowa safety Dane Belton. Belton is a player that feels like the perfect fit for new defensive coordinator Wink Martindale’s scheme. The 2021 All-Big-Ten performer had five interceptions last season, is fast, and was even tough enough to play linebacker for Iowa at one point during his collegiate career.

At pick 146, the organization took Indiana linebacker, Micah McFadden. Last season, he had four interceptions and eight passes defended for the Hoosiers. He has a solid awareness of pass coverage and has proven to be a strong tackler during his career. Could he be a starter one day? Maybe, but for right now he projects as a solid addition to the special teams.

With their second selection in the fifth round, the Giants took Arizona State defensive tackle DJ Davidson. The 6-foot-3, 327-pounder is a solid player who has the potential to earn a spot in the interior lineman rotation at some point in 2022. The position was an area that could certainly use some fresh blood and upside and Davidson offers that possibility.

In their final pick of the fifth round, the Giants took North Carolina guard Marcus McKethan. The 6-7, 340-pound player is the third offensive lineman the team took in this draft. Considering they made some signings on the line in the offseason, the team is trying to attack their blocking problem with quantity, and hopefully quality. McKethan is a powerful player who adds depth and could become a long-term contributor to the team.

In the sixth round, the organization took Cincinnatti linebacker, Darian Beavers. Beavers is a versatile player who can play inside and out, has good athleticism, and offers depth for the position. He projects to be a strong backup at the next level.