How To Watch the Arizona Cardinals Games Live This Season (2022) 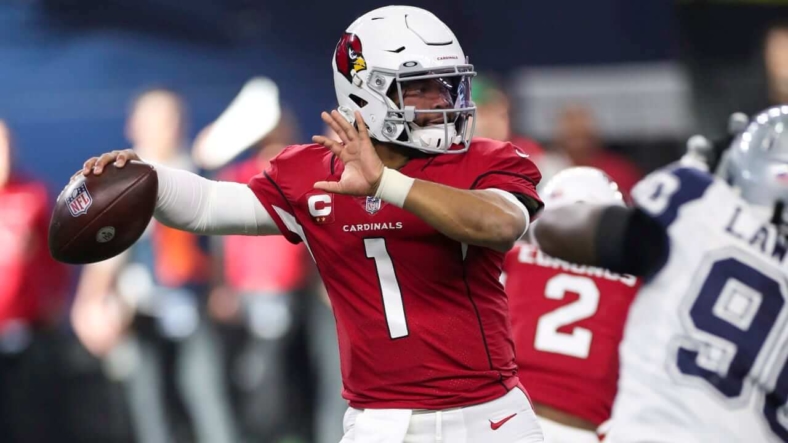 With the oldest average age of any team in the league, the Arizona Cardinals are looking to show their veteran mindset as they take the field this NFL season. Kyler Murray signed a whopping five-year, $230.5 million contract and is eager to prove that he deserves it. With the addition of Marquise Brown this year and DeAndre Hopkins last, Kyler Murray has a good chance of showing the world why he’s worth such a massive contract.

For fans looking to stream all of the Arizona Cardinals games live, look no further. Almost every Cardinals game this season will be aired on a streaming service that offers CBS, NBC, Fox, ESPN, and NFL Network. Here are the best options to watch this season.

Where can you stream almost all of the Arizona Cardinals games?

Sling TV is our preferred option to live stream the NFL this season. With Sling you can watch all local games that show on FOX or NBC as well as Monday Night Football on ESPN. For $35 per month, subscribers gain access to their choice of the Blue or Orange package. For just $15 more, the Orange & Blue plan combines the two, providing access to everything Sling TV has to offer.

From ESPN to the NFL Network, users will get everything they need from a streaming service this football season. And don’t forget that Sling TV is offering half off your first month — no contract necessary.

Hulu + Live TV will run you $69.99 per month or $75.99 for the upgraded no-ad option. Both plans include over 75 live TV channels with access to Hulu’s full on-demand library. Local and national NFL games can be accessed by CBS, Fox, ESPN, NBCSN, FS1, the NFL Network, and various regional sports networks (RSNs). As a bonus, you’ll get full access to Disney Plus and ESPN Plus, making either plan an excellent choice for sports lovers and families alike. The only downside is that there’s no free trial for either of Hulu’s live TV plans.

DIRECTV STREAM is a streaming service based on an easy-pay, no-commitment structure, making it an attractive choice for sports enthusiasts looking to get in on the action this NFL season. With DIRECTV STREAM, channel count can vary by location, but you’ll be able to stream on 20 screens in your household anytime. With a free five-day trial, you can catch the Thursday night game to Monday Night Football before deciding. Plus, after your free trial ends, you’ll get $40 off over your first two months ($20 each) — a hard deal to pass up.

FuboTV’s base plan begins at $69.99 per month. With the Pro package providing over 124 channels, 10 simultaneous streams, and 1,000 hours of DVR storage, FuboTV has everything necessary for those who prefer to watch the game on the go or at a later time. You’ll also find popular networks offered between the plans listed, including beIN Sports, NBC, ESPN, ESPN2, FS1, FS2, NFL, NFL RedZone, and NBA TV.

For the ultimate sports fan, your best bet is the Ultimate package. The plan’s price includes FuboTV’s Sports Plus package, giving you access to various Stadium and PAC-12 networks to keep you busy during NFL off days. If you’re undecided on which plan to choose, each comes with a seven-day free trial to help you make the best decision.

YouTube TV only offers two plans: a Base Plan and a Spanish Plan. Thankfully, it makes choosing this service an easy one. For $64.99 per month, the Base Plan provides access to YouTube Originals and over 85 live TV channels, including live sports, news, entertainment, and more. The Spanish Plan is just $34.99 per month and includes over 28 Spanish networks covering live sports, telenovelas, shows, and more. Both plans also include unlimited DVR space and six accounts so the entire family can join in on the fun.