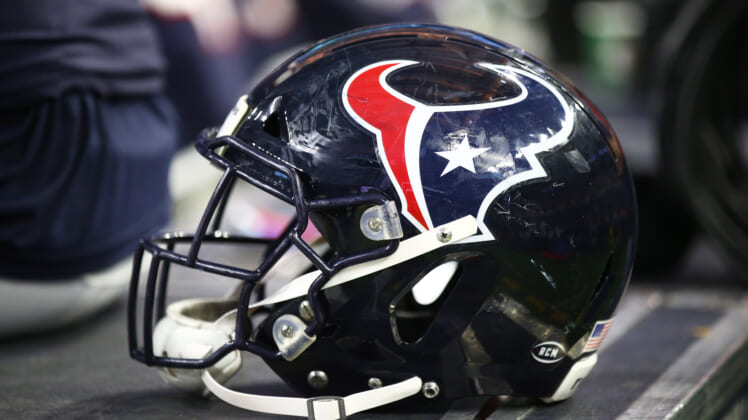 The Houston Texans’ trade of star quarterback Deshaun Watson ahead of the 2022 NFL Draft has opened up a ton of avenues for general manager Nick Caserio leading up to the annual event.

Remember, Houston didn’t have a pick in the first two rounds of Caserio’s first draft in this role last year due to the questionable trades former head coach and general manager Bill O’Brien made.

With the Texans publicly confirming that they believe second-year quarterback Davis Mills can be a franchise guy moving forward, there’s a lot of options for Houston during the draft. Below, we look at three trade scenarios to help jump start the team’s rebuild.

Houston Texans trade down from No. 3 pick

Houston would love to target someone like Michigan edge rusher Aidan Hutchinson with the third pick. However, he’s going to be off the board at one or two. This leaves the Texans with some major questions at three.

Stud safety Kyle Hamilton could very well be available. He’s seen as a generational safety prospect after a dominating career with Notre Dame. But a rebuilding team exhausting a top-three pick on this position makes little sense. The same thing can be said for offensive tackle with Laremy Tunsil still in the mix and unlikely to be traded any time soon.

Enter into the equation a potential trade-down scenario. Former Liberty quarterback Malik Willis is quickly ascending draft boards and now seems to be the consensus No. 1 player at that position. Perhaps, a quarterback-needy team like the Carolina Panthers (sixth overall), Atlanta Falcons (eighth) or Seattle Seahawks (ninth) come calling. This would enable Houston to add even more draft capital to the mix, both in 2022 and 2023.

Sure Houston would like to have someone like Cooks to catch passes from Mills moving forward. The young quarterback will need all of the options available to him as a sophomore.

With that said, the wide receiver market could dictate a move here. We’ve seen better-known pass catchers get paid in bulk thus far this offseason. However, Cooks himself has been among the most-productive receivers in the NFL over the years. He’s averaging 74 receptions for 1,052 yards over the past seven seasons. He’s also a cheap option all things considered.

Based on his performance and said contract, Cooks could likely net the Texans a second-round pick and change. Set to hit the final year of his contract, it makes sense to move the veteran receiver right now.

The bounty Houston received from Cleveland for Deshaun Watson is eye-opening. In addition to three first-round picks, the Texans added a third and two fourth-round selections. Again, Caserio is going to have so many options available to him in the next few drafts.

It’s our recommendation that he uses some of this capital to trade back into the first round for a third Day 1 selection. The idea behind this would be for the Houston Texans to add a player who could be kept longer-term with a fifth-year team option.

Selecting 37th overall in the second round, it would not cost a lot to move into the back end of Round 1. In this scenario, going after a wide receiver for Mills would be the move. Perhaps, Alabama’s Jameson Williams or Georgia’s George Pickens could be available.