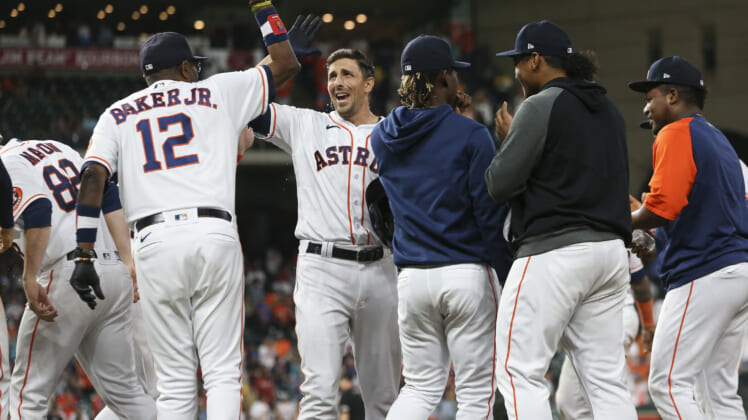 The American League East has four haymakers (Tampa Bay Rays, New York Yankees, Boston Red Sox and Toronto Blue Jays), and the Chicago White Sox are a World Series contender. With all that said, none of these ball clubs are the most dangerous team that will/could enter the American League Playoffs. That team is the Houston Astros.

Houston cruised its way to a likely American League West division title this season and is firing on all cylinders, as they’re 92-65 and the two seed in the AL.

It’s almost as if they have a camera zoomed in on the opposing team’s catcher to determine whether a breaking ball is going to be thrown in their home ballpark (just kidding but, fun fact, they actually had that a few years ago).

Here’s why the Astros are the team no one wants to face in the AL playoffs.

Manager Dusty Baker’s offense is a monster with no weakness and only upside.

While a .276 batting average isn’t what the Astros expect from him, Jose Altuve is still generating runs at a high level. Carlos Correa has been healthy and playing to his career tendencies. That being, swinging a lethal bat from the right side. Michael Brantley has been his smooth contact-hitting self. When healthy, Alex Bregman has been a force to be reckoned with. Yuli Gurriel is hitting .317.

This is a team with a deep-rooted positional core. Now they have new blood in the form of All-Star-caliber players who are nearly as important to the team’s success as the preexisting core. Right fielder Kyle Tucker has grown into his top prospect label, getting on base and slugging at a high level.

Yordan Alvarez is flat-out raking and has continually been a formidable left-handed hitter. Chas McCormick and Aledmys Diaz have had their moments and been steady players all season. This offense has power, contact, veterans in their prime and youngsters on the rise. All the while, the Astros remain one of the best defensive teams in MLB.

Houston Astros have a stout and improving starting rotation

The Astros have a young starting rotation but one that has continually grown more potent. They’re one of the best units in the sport.

While Zack Greinke moves into a veteran role — and potentially the bullpen with his recent neck injury — and Justin Verlander continues to rehab from an elbow injury, the likes of Lance McCullers Jr., Luis Garcia, Framber Valdez and Jose Urquidy have become reliable, top-of-the-rotation starting pitchers.

The most experienced of the young bunch, McCullers has become an overpowering starter who strikes out hitters at a high rate. He’s in the midst of the best season of his big-league career.

Like McCullers, Garcia has grown into a force. He’s totaling strikeouts at a high rate, working out of trouble and is still just 24. When healthy, Valdez has been an efficient left-hander who evades trouble and provides considerable length. Urquidy has done an exceptional job of keeping runners off the basepaths and inducing weak contact with his deceiving delivery.

These four starters were instrumental in the Astros taking the Rays to seven games in last season’s ALCS and simply getting that far in the postseason.

A member of the rotation in 2020, Cristian Javier has made a seamless transition to the Astros’ bullpen. If need be, he can give them three-to-four innings of relief in the postseason. Veteran right-hander Jake Odorizzi has also been a respectable force this season.

The Astros’ most valuable asset is their trove of postseason experience. Yes, this is a team that infamously took part in one of the most disgraceful scandals in MLB history. At the same time, their core (Altuve, Correa, Bregman and Gurriel) has played in countless high-leverage games in their 2017 World Series run and the seasons that followed.

They have the feel for playing and winning postseason games in hostile sports environments like New York City and Boston. A contender like the White Sox can’t say the same, as their core has a mere playoff appearance under its belt and it came last season, when there weren’t any fans in the stands for their series with the Oakland Athletics.

The AL is tight, but Chicago’s postseason experience works in the Astros’ favor (they will face each other in the ALDS). While they’ll finish with the best record in the American League once again, the Rays will likely face a team that’s familiar with their operation in the first round, that being an AL East opponent. It’s feasible to think that they’re taken the distance in round one, which would mean the Astros get a few more days of rest for the ALCS — if, of course, they beat the White Sox in three or four games.

Houston has a high-octane offense that’s difficult to pitch to, a sturdy rotation with upside and a reliable bullpen, which was the shaky element of their roster in years past.

The Astros have invaluable experience competing in October and are the villains of the sport. They have nothing to lose and are a handful for any team in the sport.