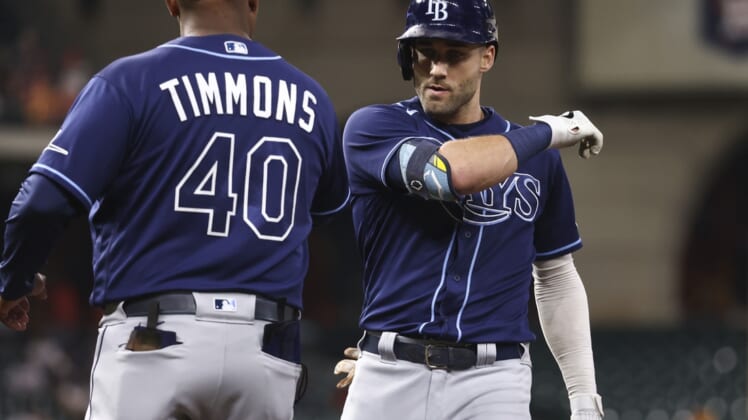 Jason Castro worked a bases-loaded walk with one out in the ninth inning Tuesday and the Houston Astros rallied for a 4-3 win over the visiting Tampa Bay Rays to snap a four-game losing skid.

After a 10-pitch walk by Chas McCormick forced home pinch runner Jose Sira and tied the game, Castro won an eight-pitch confrontation with Rays right-hander JT Chargois, who had entered after left-hander Josh Fleming (10-7) had loaded the bases.

Carlos Correa, who had reached on a fielder’s choice following a replay reversal, scored the winning run for Houston (92-65).

Randy Arozarena drilled a first-pitch slider from Astros right-hander Phil Maton to right field with one out in the ninth for his 20th home run, snapping a 2-2 tie Houston had forged in the eighth when Jose Altuve smashed his career-high-tying 31st home run off Rays reliever David Robertson.

Rays right-hander Michael Wacha was exceptional. He worked five hitless innings for his third scoreless start of at least five innings. Wacha retired the final 12 batters he faced, beginning that dominant stretch by striking out the side in the second following a leadoff walk to Correa.

The Astros recorded their first hit with two outs in the sixth when Alex Bregman clubbed his 12th home run, a solo shot off Rays reliever Andrew Kittredge.

The Rays (97-60) spotted Wacha a two-run lead before he took the mound. Brandon Lowe laced a leadoff single to center in the top of the first inning, and Yandy Diaz followed with his 13th home run this season — a two-run, 353-foot shot to left off Astros right-hander Jose Urquidy.

Urquidy recovered from the early ambush but did face a white-knuckle moment in the second inning. He struck out Ji-Man Choi and Mike Zunino with haste but followed by surrendering a single to Kevin Kiermaier and a squib double to Lowe that put two runners in scoring position for Diaz. Urquidy quickly got ahead in the count, 0-2, but Diaz ran the count full before striking out.

Urquidy settled down for good and retired the final seven batters he faced. He allowed two runs, four hits and one walk, with six strikeouts, in five innings. Urquidy threw 91 pitches, 55 for strikes.

Diaz departed in the seventh inning with left rib discomfort.