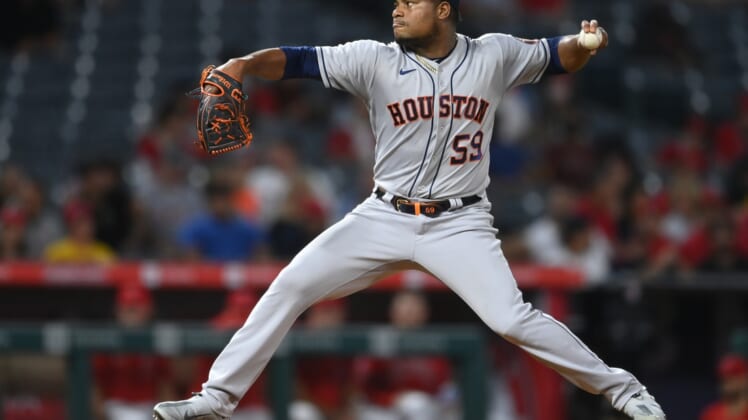 The Astros also got a ninth-inning grand slam from Marwin Gonzalez and a homer from Jose Siri leading off the first. They had 17 hits in all, including four from Carlos Correa and three from Yuli Gurriel.

The win, coupled with the Oakland Athletics’ loss to the Seattle Mariners, reduced the Astros’ magic number to clinch the American League West to six.

Valdez (11-5) fanned six, gave up six hits — all singles — and walked three, so the Angels had baserunners. However, he got outs in key situations, as the Angels were 0-for-4 with runners in scoring position when Valdez was in the game. That includes the seventh inning, when the Angels (72-78) had the bases loaded with two outs for David Fletcher while trailing just 2-0.

Fletcher hit a sharp one-hopper to Correa, and the shortstop fielded the ball cleanly and made the throw to first to end the threat and keep the shutout intact.

Brooks Raley (eighth inning) and Seth Martinez (ninth) finished it off for Houston (89-61).

The Astros took the lead immediately against Angels starter Jaime Barria (2-4), Siri hitting the third pitch of the game over the fence in left field for a 1-0 lead.

Later in the inning, singles by Yordan Alvarez and Gurriel set things up for Correa, whose two-out single scored Alvarez to put Houston up 2-0.

Barria settled in from there. He wound up lasting 5 1/3 innings and yielding only two runs despite giving up 10 hits. Barria struck out five without issuing a walk.

The Astros blew the game open in the eighth and ninth innings, scoring four times in each frame. In the eighth, Gonzalez drove in a run with a single before Maldonado, hitting just .176 this season, got ahold of a pitch from Andrew Wantz for a three-run homer and a 6-0 advantage.