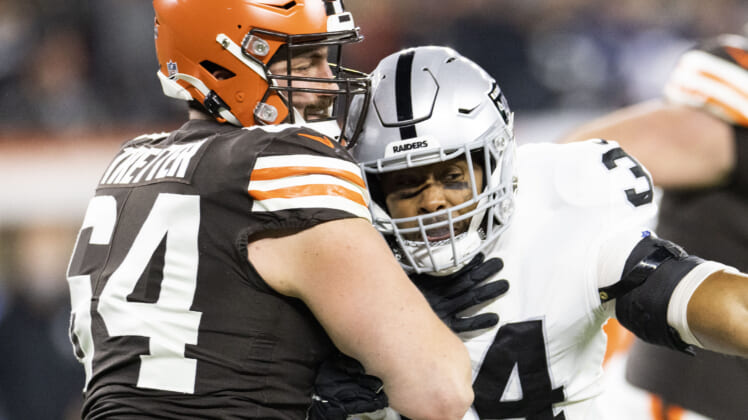 As possibly one of the top remaining free agents available, J.C. Tretter’s limited interest remains a mystery. Establishing himself as one of the best centers in the NFL during the past few seasons, Tretter doubles as the president of the NFL Players Association. Solid in pass pro while being a strong run blocker, it’s only a matter of time before the 31-year-old, eight-year vet finds a new home for 2022.

Here are four teams Tretter could sign with in free agency over the next few weeks.

The Minnesota Vikings have made an effort to improve the offensive line, whether it’s selecting Christian Darrisaw with the 23rd pick a year ago, Ezra Cleveland’s selection in the second round in 2020, and before that, Garrett Bradbury in the first round in 2019. Even new general manager Kwesi Adofo-Mensah joined in on the fun, adding Ed Ingram with the 59th pick in the 2022 Draft.

Unfortunately, Bradbury hasn’t been able to deal with the bigger, stronger players at the point of attack in pass protection. This has led to several embarrassing moments under center for Kirk Cousins.

Now that the new regime has committed to Captain Kirk, they might want to protect him a bit better along the interior. Perhaps the best way to do that is by signing J.C. Tretter in free agency. Tretter committed just five penalties, allowed one sack and finished with an 83.7 pass-blocking grade per Pro Football Focus, which nearly doubles Bradbury’s 43.7 grade from 2021.

If there’s one thing to take away from the Las Vegas Raiders’ offseason, it’s that they’re making a strong effort to rise to the top of an uber-competitive AFC West division. They’ve added to the defensive line, the secondary, and have even reunited Derek Carr with one of his best friends by adding Davante Adams. Now, they need to make sure their star quarterback is protected.

They won’t have Marcus Mariota to spell Carr off the bench anymore, so making sure he’s rarely hit is imperative to their success in 2022. Enter JC Tretter. The Raiders’ starting five isn’t set, signing Tretter could allow them to move Andre James to guard if they still feel he’s capable of starting. Either way, Tretter is an improvement at the pivot in Vegas.

While some Raiders took issue with Tretter when he was a member of the Browns, as he helped get the Raiders-Browns matchup delayed after Baker Mayfield and several more of his teammates experienced a COVID outbreak, they might appreciate having Tretter on their side going forward. Plus, K.J. Wright is a free agent, so the bad blood may already be gone.

The Miami Dolphins didn’t get great offensive line play in front of Tua Tagovailoa a year ago. Aside from Terron Armstead, it’s hard to find another guaranteed starter on the line. One area they could stand to improve is their starting center position which Michael Deiter currently appears in line to repeat as the starter. Deiter wasn’t horrible, only allowing one sack while committing three penalties across 546 snaps, while allowing 10 pressures.

Meanwhile, Tretter also allowed 10 pressures a season ago, playing nearly twice the snaps with 1039 plays at center. If the Dolphins are serious about giving Tua every chance to succeed after getting him a shiny new toy at wide receiver, they need to provide him with better opportunities and that starts in the trenches.

Ever since Travis Frederick retired after struggling through an autoimmune disorder at the age of 29, the Dallas Cowboys just haven’t been the same at the center position. In an attempt to solve the problem, they selected Tyler Biadasz in the fourth round back in 2020, but he hasn’t developed quite as quickly as they’d like.

The Cowboys have also moved on from La’el Collins this offseason, creating yet another shift in the line. Maybe that’s where Tretter can help, as an eight-year veteran who’s played for both the Packers and Browns, he’s been a part of some great offensive lines, which is what Dallas needs to rebuild to help Ezekiel Elliott remain effective as he too deals with knee issues.

With 90 career starts at center, Tretter could show Biadasz some vet moves, giving him the chance to still develop into an above-average player for America’s Team in the long run. Signing Tretter could be a win-win situation for everyone involved.