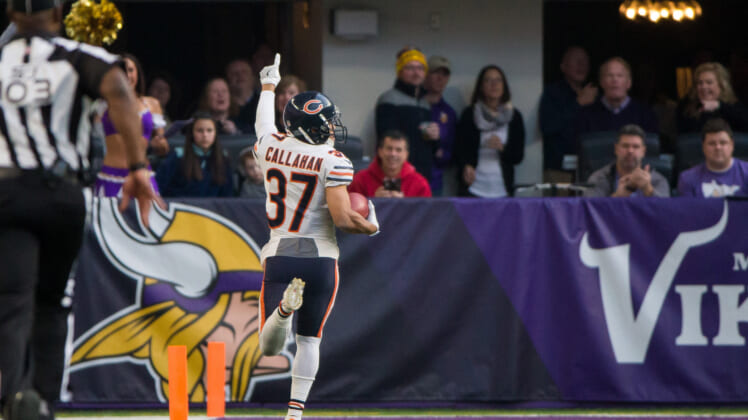 The Minnesota Vikings are actually doing what both Kwesi Adofo-Mensah and Kevin O’Connell said they planned to do with the roster, which is competing in 2022. The biggest signs of this are holding on to Kirk Cousins, retaining Danielle Hunter, and recently adding Za’Darius Smith.

They may have lost out on the Ryan (Rick?) Bates sweepstakes, if you could call it that, but they are still rumored to be linked to a few other free agents. Obviously, JC Tretter is the white whale, hopefully he doesn’t get away, but the squad in purple still has a desperate need to add cornerbacks.

Sure, they’re said to be visiting with a familiar face of Mike Pettine, (current assistant head coach of the Vikes) by bringing cornerback Chandon Sullivan to the TCO Performance Center in the Twin Cities, but such a move is unlikely to get fans too excited. Certainly not as pumped as they were to sign Za’Darius.

Sullivan has started 21 games in his four-year career, and did have new personal best three interceptions a year ago. His best role is likely in the slot, where he ranked 10th in yards allowed per snap in 2021. But there are far also a few other intriguing cornerback options that remain available.

Patrick Peterson, for one, is known to have interest in returning to the Vikings, where he’d likely resume his role as the top corner in town, but there has been very little movement on that front. For one, Peterson should be brought back, he already likes the Land of 10,000 Lakes, but the Vikings may not be willing to meet his asking price, whatever that is.

Instead, they may turn to the scrap heap, for players such as Sullivan while making cornerback a top priority heading into the draft, where using the No. 12 pick on a CB is a strong possibility.

Other than retaining Pat Pete, or drafting a top corner, here are four free agent cornerbacks the Vikings could still sign to fill a starting role in 2022. The best part? They all have ties to new defensive coordinator Ed Donatell, having played in his defenses before.

A nine-year veteran, A.J. Bouye and Ed Donatell crossed paths in 2020 when the cornerback started seven games. Unfortunately, those were the only contests Bouye suited up for, which has been a common theme for the 30-year-old corner since entering the league as an undrafted free agent. There’s a reason why Bouye hasn’t been able to stick, having switched teams in each of the past three seasons.

Yet he has played at a high level in the past like when he intercepted six passes, making the Pro Bowl with the Jaguars in his lone full season in 2017. But his play has tailed off a bit since, until recently.

In 2019 PFF graded Bouye at 58.4, in 2020 his grade was 55.6, though it improved to 66.8 this past season in Carolina. Even then, his grade could be misleading as Bouye allowed 33 catches on 41 receptions. Any interested organization would likely sign him on a one-year, prove-it deal but if the Vikings are after bargains like Sullivan, they don’t have much to lose by giving the former Pro Bowler a chance as well.

The most accomplished player on this list, Chris Harris Jr. has been to four Pro Bowls, won a Lombardi, and has been named to an All-Pro team. He’s also 32 years old and has missed 10 games in the past two seasons with the Chargers. Before his tenure in LA, Harris played for Donatell in 2019 with Denver. But like some others mentioned here, Harris’ best days are behind him.

Still, Harris has 141 starts under his belt and is likely a better option than running Cameron Dantzler, Kris Boyd, and Harrison Hand as the top three corners in 2022. Like Sullivan and the last player on this list, Harris has been great when covering slot receivers in the past. Though if they sign Sullivan, finding a nickel back won’t be of utmost importance.

There are actually two Kyle Fullers in the NFL. One plays offensive line, and the other mans the cornerback position. We’re after the two-time Pro Bowl corner here. If the Fuller name is familiar, it’s because he has three brothers who have also played for NFL teams.

Fuller found himself in the doghouse with the Broncos last season, getting benched altogether in Week 7 for poor play. It led to some trade rumors, suggesting Fuller could be on the way out ahead of the trade deadline. Ultimately the Broncos didn’t find a taker for his $9.5 million salary. Other than that, Fuller started 10 of the 16 games he played.

As you can imagine, last season wasn’t a particularly good one for the former All-Pro corner. According to Pro Football Focus, Fuller allowed a catch in 44 of the 67 times he was targeted in which he earned a 47.2 PFF grade. One of his best seasons came in 2018, when Fuller led the NFL with seven interceptions.

Fuller has played under coach Donatell for five of his seven seasons in the league. At age 30, there’s no reason to believe he’s suddenly lost his ability. He may have taken a step or two back, but as fans have seen from Antoine Winfield, Terence Newman, and Patrick Peterson over the years, age is simply a number. The Vikings, if there’s a good relationship between Donatell and Fuller, should be able to land the CB on a relatively affordable contract.

Since entering the NFL as an undrafted free agent in 2015, Bryce Callahan has had a chip on his shoulder. He’s also always had Donatell has his coach, whether it was as a defensive backs coach or as his defensive coordinator. During his six-year career in which he’s made 45 starts, Callahan has grown into one of the best nickel cornerbacks in all of football.

Yet, the 30-year-old corner has also missed 12 games in his past two seasons. Unlike the others listed above, Callahan has maintained his elite level of play all along. In 2021 he allowed a completion percentage of 56.8% and the year before his stats were even better, allowing just 54.4% of passes thrown his way to be caught.

At the end of the day, the Vikings just need to add some competent bodies in their secondary this offseason. Any of the above players would be an improvement over most of their in-house options, but since all five of these candidates have previous ties to coaches within the organization, they could be the ones with the most mutual interest.