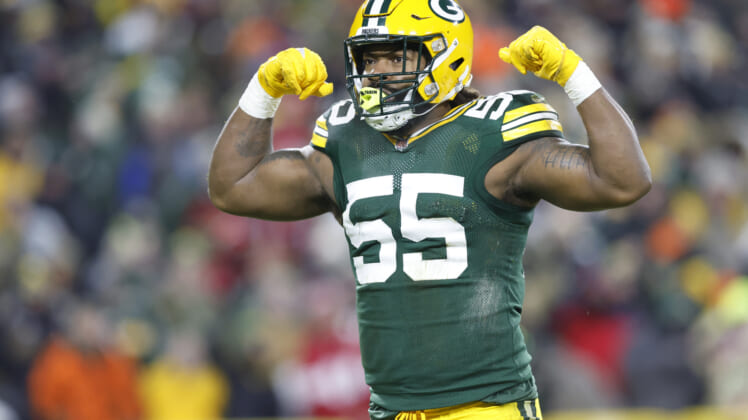 After mostly sitting on the sidelines while big-name players are trading teams around the league, the Minnesota Vikings made their first big-named addition of the offseason by signing Za’Darius Smith to a three-year, $42 million deal.

To do so, they converted Danielle Hunter’s signing bonus, helping fit Smith under the cap to form a ferocious pass-rush duo that could lead to several meetings at the quarterback like the Purple People Eaters used to do.

Down below we offer three moves the Vikings should make next, but first, a brief breakdown of what the Smith signing means, and what the organization has accomplished so far this offseason.

Breaking down the Za’Darius Smith to the Minnesota Vikings signing

The reason fans are so excited about stealing another former great from the Green Bay Packers is because Za’Darius Smith is really good. The last full season both Smith and Danielle Hunter played, the duo led the NFL in pressures, per Pro Football Focus.

This doesn’t guarantee a repeat of 2019. Both players have had their own injuries since. Hunter going through neck surgery, and then a torn pectoral muscle, and Smith having back surgery last year.

But, when the pass-rushers are at their best, few are more effective. Having both Hunter and Smith coming off the edge is a problem for opponents on gameday. Not to mention, the Packers cut Smith despite him generating 26 QB sacks in just 33 games, there’s no doubt he’s motivated to show his old team they made a mistake.

At this point, general manager Kwesi Adofo-Mensah has managed a tight cap situation by holding onto key players who may or may not have been discussed in trade talks in an effort to remain competitive in 2022. With rumors suggesting the team could move on from Hunter, now that his signing bonus is believed to have been paid, it wouldn’t make sense to trade him at all this season. Instead, they’ve chosen to add to their core.

To date, the Vikings have added a run-stuffing nose tackle in Harrison Phillips to help instill the 3-4 base defensive coordinator Ed Donatell wants to operate. They’ve also added veteran tackling machine Jordan Hicks to hold down the other middle linebacker spot next to Eric Kendricks.

Aside from adding the two-time Pro Bowl edge rusher in Za’Darius Smith from the Packers, the Vikings have made complementary moves to fill in areas of the defense in dire need of improvement. There are still a few areas of need the team could address in free agency for a relatively low cost, keeping their cap situation in mind.

Here are three free agents the Minnesota Vikings should sign next.

Bring Kyle Rudolph back to Minnesota

The Minnesota Vikings re-signing Kyle Rudolph makes too much sense not to happen. Rudolph still owns a home in Minnesota from his 10-year career up north. He’s the franchise’s all-time touchdown leader among tight ends and let’s be honest, he didn’t suddenly lose his hands at the age of 32. Some tight ends have been known to still be effective into their late thirties, there’s no reason why Rudolph can’t be of the same mold. Losing a step, not as athletic? Well I hate to break it to you, but he was never the quickest option on the field.

Rudolph makes an impact thanks to knowing how to use his big frame to his advantage, which makes him an ideal red-zone threat. He can hold his own as a blocker, and asking him to be the second tight end behind Irv Smith Jr. in an offense where he’s already familiar with the quarterback should be an easy transition.

The Giants released Rudolph on March 2 when a new regime came in looking to add their own pieces to fit their ideal puzzle. It’s the same thing we’ve seen KAM do, by moving from Michael Pierce to Horrible Harry. This isn’t an indictment on Rudolph or his skillset. He was being paid too much from the start, which is likely why he leapt at the opportunity to begin with, but he was never going to back to receiving 80 targets per season as he did with Minnesota. It was a bad fit from the start in New York, but he got paid.

Some may think Rudolph and Cousins have some beef. Choose to believe what you want, but that doesn’t seem to be true at all.

In a radio interview after signing with the Giants, Rudolph was asked about his new quarterback, Daniel Jones, who was the sixth overall pick in 2019. What he said shouldn’t have rubbed anyone the wrong way.

“Absolutely, I’ve said that since Day 1. [Jones is] is certainly the most talented guy I’ve ever played with.”

Kyle Rudolph on Daniel Jones (H/t to The Viking Age)

Saying Jones is the most talented isn’t really a knock on Cousins. Jones is one of the fastest quarterbacks in the NFL, he certainly has a lot of athleticism, and as a former top-ten pick, he does have talent. It doesn’t mean he’s put it all together yet, but he is more naturally talented than Cousins is. They didn’t ask Rudolph who the better quarterback was, or who can get him the ball the most efficiently, they asked him if they felt Jones was more talented than Cousins.

At the very least, Rudolph would be a low-risk bargain buy to add another red-zone weapon to coach Kevin O’Connell’s offense. The team could use a new TE2 after Tyler Conklin signed with the Jets, and Johnny Mundt likely isn’t the solution, but Rudolph could be.

Since entering the NFL as an undrafted free agent with the Chicago Bears in 2015, cornerback Bryce Callahan has never not had Ed Donatell as his coach. Donatell was the DBs coach for the Bears from 2015-18 and when Vic Fangio went to Denver, he made sure Callahan came with. They signed the nickel back to a three-year, $21 million contract where he’d start 16 games over the next two seasons with the Broncos.

Callahan isn’t the biggest or the fastest, but he’s tougher than his 5-foot-9 frame would suggest. He’s developed a strong reputation for being able to cover the slot. A year ago, PFF gave Callahan an 84.1 player grade. Injuries impacted his play during the 2021 season, but coach Donatell knows the type of player Callahan can be, which is one of the top No. 3 corners in football when healthy. Again, he wouldn’t break the bank, but Callahan could end up being Minnesota’s best CB in 2022 at a fraction of the cost of bigger-name players.

Finally we’ve arrived at the name many Vikings fanatics have targeted the most since he’s become available. Fans are tired of seeing Garrett Bradbury frequently getting flipped on his back like a turtle, and J.C. Tretter, one of the best pass-blocking centers was released by the Browns as they pursued the Amari Cooper and Deshaun Watson trades.

Their loss could be Adofo-Mensah’s gain. Maybe the Vikings weren’t planning to upgrade over Bradbury initially when they took the podium and hyped up the potential of Bradbury, which still exists as he enters his fourth season.

But they also didn’t know Tretter would become available. They probably had thought in order to land such a player who could feasibly start over Bradbury from day one, that they’d have to invest their top draft selection, by drafting Tyler Linderbaum at No. 12. For a team with other needs, such as cornerback, and possibly another big man along the defensive line, taking another center in the first round likely wasn’t on their radar.

However, the Browns releasing Tretter may have thrown a wrench into their plans. It’s a bit odd that he still remains available. For three seasons in a row, Tretter has allowed just one sack each year. Compared to Bradbury allowing 11 sacks in that same timeframe, there’s a clear improvement from a pass-blocking perspective. Tretter has ranked as the second-best pass-blocking center for the past three years.

Tretter is reliable, having never missed a snap due to injury in his five seasons with Cleveland and could anchor an otherwise solid offensive line unit that just needs to find a permanent solution at right guard. 2021 third-round pick Wyatt Davis could be the solution there, but he needs to get some snaps first.

Like the other names on this list, Tretter won’t command top dollar, yet he has the potential to play at a Pro Bowl level for large stretches of the season. We’re not sure that’s something Bradbury is capable of just yet.