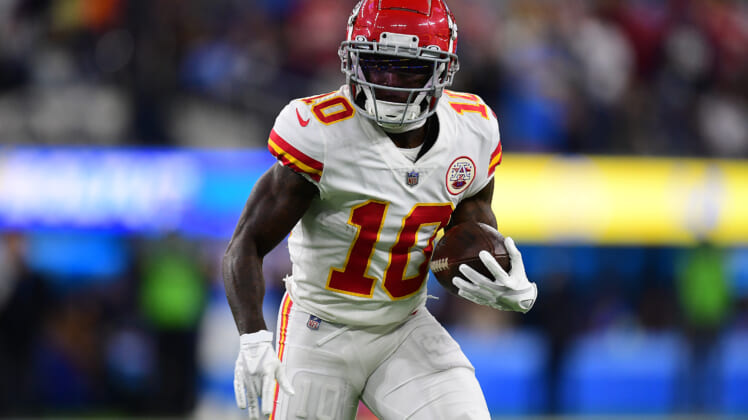 Let’s look into the record books, data and more to find the fastest 40 times ever in the NFL.

Unlike Tyquan Thornton seeing his official 40 time downgraded by the NFL after initially setting the record, Barnes 4.23 40 time is now official. The Baylor cornerback ran that time during the final day of the 2022 NFL Scouting Combine on Sunday.

This means that Barnes is in the record books as running the second fastest 40 time in NFL Scouting Combine history behind John Ross.

A fast stopwatch at the 2022 NFL Combine led to buzz when Tyquan Thompson seemingly set the record with a 4.21 40-yard dash time. However, the NFL officially announced following Thursday’s event that Thornton officially finished with a 4.28 time. It would finish just ahead of the Tyreek Hill 40 time set at his Pro Day.

Being the fastest player doesn’t make you an all-time great, demonstrated by the Tom Brady 40 time (5.28) and Jerry Rice 40 time (4.71). There are also incredible stories, like the reports Darrell Green ran a 4.09 time in the 40-yard dash at training camp in 1986. For this list, we’ll examine the fastest 40 yard dash times with multiple recordings.

Here are the fastest 40 yard dash times ever.

Take a look at the players with the fastest 40 yard dash times and you’ll notice a trend. There are a lot of former Raiders’ draftees. Al Davis loved drafting players who lit up the stopwatch, posting the fastest 40 time, and Fabian Washington is part of that history. The No. 23 pick in the 2005 NFL Draft, Washington is one of the fastest NFL cornerbacks ever. But Washington’s blowup performance at the 2006 NFL Scouting Combine didn’t pay off, playing just 81 games in six seasons.

Tyreek Hill is the fastest player in the NFL right now, there’s no doubt about it. Frankly, he might be the best wide receiver in 2022. Hill didn’t run at the 2016 NFL Scouting Combine due to a domestic violence arrest, which also pushed him down to the 165th pick. But at the West Alabama Pro Day, multiple scouts clocked HIll at a 4.29 40-yard dash. No defensive back has a chance against his speed in the NFL today, making him a matchup nightmare. How fast is Tyreek Hill? Just as everyone that hurts their neck looking back as he blows by them.

Did we mention Al Davis loved picking players based on their 40 time? Washington and Stanford Routt were part of the Raiders’ 2005 draft class. Neither defensive back ever made the Pro Bowl in their careers. But Routt did play in the NFL for nine seasons, starting 110 games for the Raiders and delivering a pick-six in 2010.

There are legends behind many of the fastest 40 yard dash marks. Unsurprisingly, the sensationalism around Deion Sanders matches his legendary reputation. Sanders set the NFL Combine record for the 40-yard dash in 1989, breaking the mark in ‘Primetime’ fashion. he walked into the stadium and ran a 4.27 in front of teams without stretching and then sprinted out of the building and left. The rest is history.

Marquise Goodwin has delivered some memorable moments during his football career, including a tribute to his lost newborn child after a touchdown. But the Chicago Bears wide receiver must also be recognized as one of the fastest football players. A two-sport star at Texas, playing football along with track and field, Godwin was a four-time All-American in track with program records in the long jump. At the NFL Scouting Combine, he clocked in a 4.27 40-yard dash and has made plenty of big plays.

NFL fans won’t recognize Jerome Mathis. A fourth-round pick in the 2005 NFL Draft, his NFL career only lasted a few seasons. But he’s certainly not one of the draft busts with one of the fastest 40 yard dash times ever. A track and field sensation in Virginia, Mathis became a return specialist in college. He clocked a 4.26 40 time in 2005, one of the best marks in NFL history. While he only played three NFL seasons (2005-’07), he earned first-team All-Pro honors as a returner after is rookie season. Injuries and arrests derailed his career shortly after.

College football fans remember Dri Archer. He became a fan favorite at Kent State, especially in his final two seasons. Archer earned an NFL Combine invite after totaling 2,844 scrimmage yards and 719 kickoff return yards in his final two collegiate seasons. He caught everybody’s attention in Indianapolis, clocking a 4.26 40-yard dash. But after being selected 97th overall by the Steelers in the 2014 NFL Draft, in front of Devonta Freeman, Archer played in just 20 games and never played another snap after the 2015 season.

Those who faced former Ohio State wide receiver Chris Olave during his brilliant four-year career with Ohio State knew full well that the 6-foot-1 pass catcher can turn on the burners.

NFL teams watching Olave perform in Indianapolis during the NFL Scouting Combine Thursday evening got a first-hand view of this.

The likely first-round pick put up one of the best 40-yard dash times in the history of the longstanding event. He was timed in at 4.26, tying the likes of Jerome Mathis and Dri Archer with the fifth-fastest 40-yard dash in combine history. 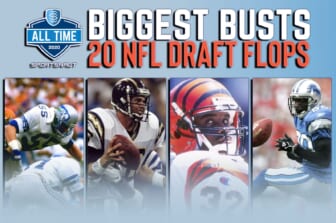 Heading into the 2007 NFL Scouting Combine, many wondered if we’d ever see a prospect set a new record for the fastest 40 yard dash ever. Then Chris Johnson took the field. The East Carolina running back as a projected third-round pick, Johnson stepped to the line and took off. After 4.24 seconds, everyone was stunned. Johnson went on to become a three-time Pro Bowl selection, was recognized as the fastest NFL player for years and delivered a 2,000-yard season that no one forgets.

Who is the fastest player in the NFL? If based on the 40-yard dash, the title belongs to John Ross. Coming off an incredible 2016 season at Washington (1,150 receiving yards, 19 total touchdowns) everyone tuned in for the 2017 NFL Combine thinking we might see history. That’s exactly what happened. While Chris Johnson believes the NFL rigged it, wanting him to lose crown for fastest 40 yard dash time, the clocks and stopwatches say Ross is atop the official charts.

Unfortunately for the Cincinnati Bengals, it didn’t result in NFL success. After drafting the 5-foot-11 receiver with the No. 9 pick in the 2017 NFL Draft, picked ahead of Patrick Mahomes, Deshaun Watson, T.J. Watt and two rounds before Cooper Kupp, Ross lasted just four seasons in Cincinnati and has totaled just 957 receiving yards in 37 games.

In fact, Thornton’s first run came in at 4.21 seconds, breaking the NFL Scouting Combine record previously held by the aforementioned Josh Ross. While this might not be enough for Thornton to be an early-round selection in the 2022 NFL Draft, it opened some eyes.

We arrive at Bo Jackson, the mythical god of sports. ESPN’s 30 for 30 captures his story perfectly, touching on so many of the wild tales that captured his athletic prowess. But the Bo Jackson 40 time is its own tale. Some suggested he broke the 4.0 barrier, posting a 3.9 time at the NFL Combine. But that’s a tall tale.

Raiders’ beat writer Jerry Knaak tracked down the truth, Jackson never attended the 1986 NFL Scouting Combine. Thus shattering the stories. But Jackson did run at Auburn’s Pro Day, with dozens of NFL scouts, coaches and general managers in attendance. They say he clocked in at a 4.16, Jackson suggests it was a 4.13. The NFL won’t recognize it officially as the fastest 40 yard dash ever, but Bo knows. Jackson might just be the fastest NFL player ever.