Evaluating a Myles Turner trade from all sides 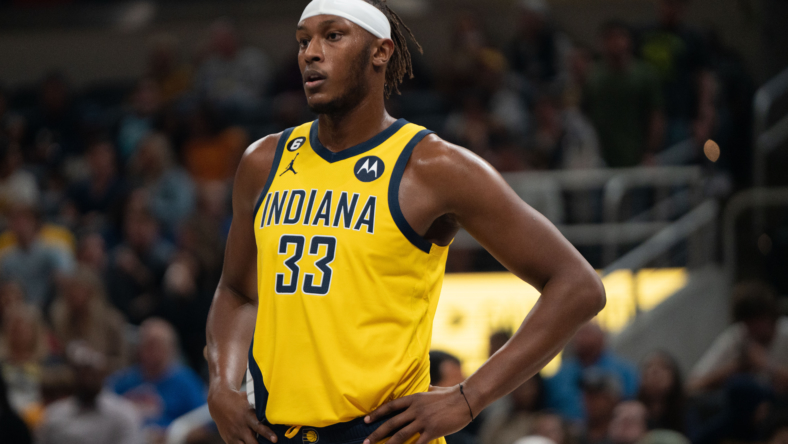 Myles Turner and the Indiana Pacers are 6-6, which is a record few expected when the season started. However, it is not uncommon to see teams who were projected to be bad start the season by defying expectations, only to settle into the original projections later in the year. This is not meant to be hating on the early season success of the Pacers, but more as a reminder to keep everything in check.

If, after 25 games, the team is still at .500 or better, then fans should ignore all previous expectations and unquestionably embrace the team’s success. The reason for the 25-game mark is that it takes about 20-30 games to really evaluate how good a team is going to legitimately be.

With this in mind, we beautifully segue into the trade Myles Turner conversation. This topic is divisive, but here we plan to bring both sides together and explain each other’s viewpoint in an adult manner.

Why is Myles Turner so divisive?

Turner has been a polarizing player for the Pacers fan base. You are either pro-Turner or anti-Turner. If you’re on the pro side, you realize that he is essentially the modern-day prototype big man. A player who is more about facing up, shooting threes, blocking shots, and the dribble drive. This, unfortunately, comes with the negative of not being an excellent rebounder.

If you are on the anti side, then you see Turner as being “soft” (whatever that means from the fanboy), not a good rebounder for being one of the tallest players on the court, and unwilling to play on the low block with his back to the basket. You cling to the old era of big men like Rik Smits, Dale Davies, Brad Miller, and Jermaine O’Neal.

Turner’s career stats aren’t as bad as the naysayers would lead you to believe.

Why the Pacers and Turner need to see other people

Turner is 26 years old, which is getting up there in age for non-contending teams in the NBA. He is also set to become an unrestricted free agent at the end of the season. Along with James Johnson and Oshae Brissett. Other players that will be restricted free agents are Goga Bitadze, Trevelin Queen, and rookie Kendall Brown.

Also, Turner has said that he wants to test free agency after this season. Indiana is the only organization he has known in the NBA. And the fan base has turned on him, so it makes sense that he would want to see what else is out there.

If Turner makes it to free agency, then he will be one of the youngest and top targets for teams. It would also mean that the Pacers get nothing in return for him. This is another reason why it makes sense for the team to trade him before the trade deadline expires. Now, what he would fetch in a return package depends on what the acquiring team is willing to give up.

If Turner truly wants to hit free agency at the end of this season, then the acquiring team isn’t likely to give up as much as they would only be renting Turner’s services for the remainder of the season. However, if Turner agreed to sign a contract extension with the acquiring team, then that team might be willing to give up more in return. It is better to get something for Turner than to not get anything.

Related: Indiana Pacers could be developing the best backcourt in team history

Reasons why the Pacers and Turner need each other

So, the plan is to get up close and defend the opponent, daring them to drive by, knowing that Turner is back there, ready to block or alter the shot. It’s not necessarily the best strategy to use, but it’s the strategy the Pacers have to use right now. If the team is able to acquire a better wing defender or play better defense on the wing, then this strategy could change.

Another reason the organization needs to keep him is this team is fairly young, and Turner is one of the few veterans it has on its roster. Especially one of the few that is getting meaningful playing time. When young teams are being built and are getting closer to competing for the playoffs and titles, they need some veterans on the team to help guide them.

Closing arguments for everyone to consider

Turner is one of three remaining players from the Pacers’ last trip to the playoffs. The other two are Bitadze and T.J. McConnell. And with the surprise play from rookie Andrew Nembhard, it’s quite possible McConnell could find himself on the bench for more games. Plus, a big-man rotation of Turner, Isaiah Jackson, and Jalen Smith is something many teams would want to have.

Three athletic big men who can run the floor, shoot threes, rebound, and block shots. A lot of teams have one big man who checks most of those boxes. Then their backup isn’t nearly as good, so the team suffers because of that weakness. The Pacers wouldn’t have to worry about that issue.

Then there is also the team’s recent history, with one of its star players nearing the end of their current contract. Back when Victor Oladipo was playing for Indiana, his contract was coming to an end, and he too said he wanted to test free agency. Instead, the Pacers provided him with a lucrative extension, despite what he says, and he signed it.

The Pacers could follow a similar path and extend Turner. This would then give the team a stable frontcourt to go with its backcourt of the future. Especially if Turner continues with his current play this season.

Again, if he continues this level of play, many teams would be tripping over each other trying to acquire his services. And they’d be more than willing to pay a big price to get Turner. However, the Pacers could decide they want to retain him and, possibly, overpay him to stay. Therefore, they set the asking price too high, and no team agrees to pay.

The best course of action for both Turner and the Pacers to take right now is to just play out the season and see what happens. Maybe a team will make a Godfather offer, and the Pacers take it. Or maybe the team agrees to compensate and convince Turner to stay with the only organization he’s ever known.

And then there’s always the concern of an inj…I’m just not going to even spell it as I don’t want that to be put out into the universe and possibly come true. But, for now, the best thing both sides can do is see how the season plays out. And the best thing the fans can do is cheer on their Pacers and its current roster. It’s been a while since this team has been fun and exciting. 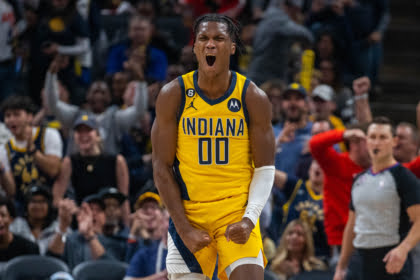