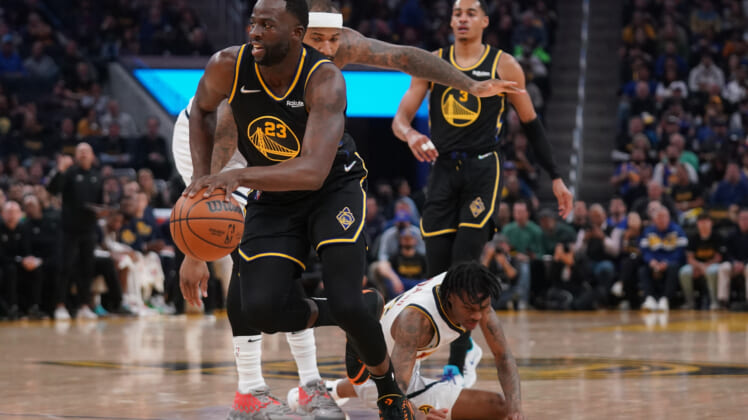 Green’s ejection came after a hard foul on Grizzlies forward Brandon Clarke. He was called for a Flagrant 2 and thrown out of the game before the three-time champion danced around the court to mock Grizzlies fans.

This seemingly changed the complexion of the game with Memphis scoring all five points to close out the second quarter following Green’s ejection. However, Golden State was able to pull off a dramatic one-point win over Memphis.

Following the game, Clarke took aim at the Green ejection and the perception that the highly volatile Warriors star is known for antics like this.

“He’s been known for flagrant fouls in his career. I’ve watched them on TV my whole life it feels like. It’s not shocking that he did that.”

As he’s been known to do, Green had a reaction to Clarke’s taking a shot at the forward.

Green also took to his podcast to explain his ejection.

“Let’s talk about me getting ejected…I am not sure what. But for a foul. Very interesting one. You know, one thing about that foul is I actually tried to hold him up. Guys were told I was ejected for throwing him down. Which is interesting, because, even when he hit the ground, I still was holding his jersey. At this point, I kinda expect things like that. I’ve been suspended from Game 5 of the NBA Finals.”

If you remember correctly, Green was suspended for Game 5 of the 2016 NBA Finals against the Cleveland Cavaliers. His Warriors were up 3-1 in the series at that time, only to lose three consecutive to LeBron James and Co.

Most figured Golden State would melt down on the road without its anchor on the court in the second half. After all, the Warriors were 19-17 in the 36 games Green missed in the regular season. The team boasted an eye-opening 34-12 record when he played.

It didn’t happen. Riding the hot hand of Jordan Poole, the Warriors were able to pull off a dramatic Game 1 win to take home court away from the Grizzlies.

Game 2 on Tuesday is now going to be interesting. Green will be fired up big time. Whether that leads to a stellar performance or more drama on the part of the highly-divisive figure remains to be seen.

What we do know is that an inspired Green can make a major difference within the confines of an entire series. Back in Round 1, the former NBA Defensive Player of the Year averaged 7.5 points, 7.3 rebounds, 7.0 assists, 1.3 steals and 1.0 blocks on 53% shooting. Golden State was plus-75 with him on the court against Denver. It was minus-35 when he was resting.

As for Brandon Clarke and the Memphis Grizzlies, they can’t fall for Green-led shenanigans and let him get into their heads. That will lead to a 2-0 series deficit heading back to San Francisco for Game 3 on Saturday evening.