The Memphis Grizzlies and Golden State Warriors did battle in Game 1 of their Western Conference Semifinals series Sunday afternoon.

Despite being the lower seed and facing the Grizzlies in Memphis, Golden State found itself favored in the series opener.

The game proved to be one of the best of the NBA Playoffs thus far with the two teams trading jabs in the final minutes. In the end, a Klay Thompson three-pointer with 36.6 seconds remaining proved to be the difference in a 117-116 Warriors win. Here, we look at four takeaways from Game 1.

Jaren Jackson Jr. came to play for the Memphis Grizzlies

There’s no question that the 22-year-old Jackson Jr. is among the most-talented young forwards in the NBA. Unfortunately, injuries and inconsistency has held the former No. 4 pick back big time. In Memphis’ first-round series against Minnesota, Jackson Jr. averaged a mere 11.8 points on 39% shooting from the field. It was Ja Morant and others who led the Grizzlies past a game Timberwolves squad.

With that said, Jackson Jr. came to play big time in Game 1. He scored 33 points on 10-of-18 shooting, including a brilliant 6-of-9 from distance. Jackson also used his size advantage against the likes of Andrew Wiggins to grab 10 rebounds. A game that saw Morant score 34 also saw the Grizzlies find that legit No. 2 scoring option. This could be huge moving forward in the series.

Late in the second quarter of Game 1, Green found himself ejected after a hard foul on Brandon Clarke. Officials went to review and talked with Secaucus before calling it a Flagrant 2. While Green has a reputation for being a hot head, the NBA looked really bad in this situation.

As NBA players pointed out, they need to officiate the play not the player. That is to say, Green’s reputation shouldn’t have played a role in the decision-making process. It’s the NBA Playoffs. Green is among the most-important players in the game. Making this game about the officials was a bad look. It’s that simple. 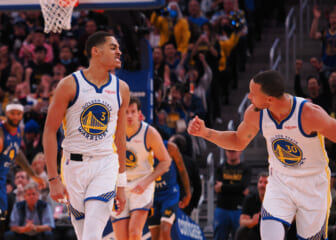 Also Read:
The Jordan Poole party has his Golden State Warriors looking like an unstoppable force

Jordan Poole is the man for the Golden State Warriors

Poole had a coming out party in Golden State’s five-game series win over the Denver Nuggets in the first round. He averaged 21.0 points and 5.4 assists while shooting 48% from distance. However, he did struggle in the final two games — averaging a mere 9.5 points on 30% shooting.

It’s one of the reasons Poole was replaced in the starting lineup by Gary Payton II. Steve Kerr also wanted that scoring off the bench. Boy, did Poole deliver. The dude led his Warriors in scoring with 31 points while grabbing eight rebounds and dishing out nine assists. He also shot a stellar 12-of-20 from the field. In a game that saw Klay Thompson and Stephen Curry struggle (12-of-33 shooting), Poole acted as the biggest difference-maker in a huge Warriors win.

Memphis Grizzlies, Golden State Warriors is going to be an epic series

We knew this heading in. Memphis won 56 games during the regular season. Golden State came away with 53 wins. The matchup of Stephen Curry and Ja Morant had everyone talking. Despite the Warriors’ experience advantage, there’s no reason to believe that this would prove to be too big of a stage for the Grizzlies.

That was clear in Game 1. If Morant had made that lay-up (one that he nails 90% of the time), Memphis would have come away with a walk-off win. Instead, it was off the mark and gave the Warriors a drama-filled win. Expect much more of the same moving forward in this tightly-contested series.