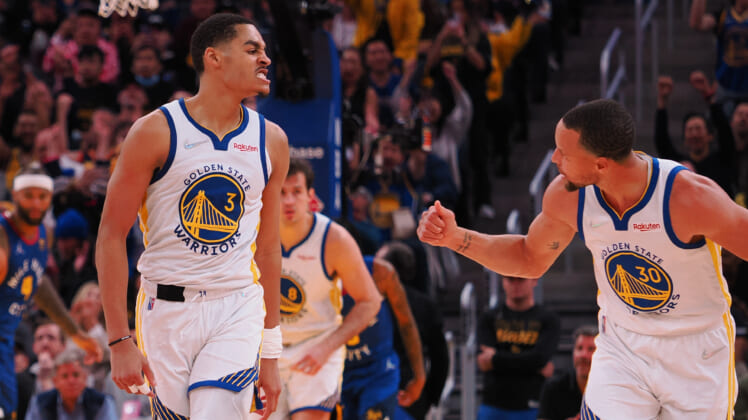 That’s not a sentence we could have even imagined when Golden State “reached” for Poole with the 28th pick in the 2019 NBA Draft.

Splitting time between the G-League and the back end of Golden State rotation for the first 1.5 years of his tenure, Poole’s ascension to stardom is now one of the biggest stories in the 2022 NBA Playoffs.

“Some of the flurries reminded me of his teammate that came off the bench. He was fantastic tonight.”

Fresh off a playoff debut that saw him score 30 points on 9-of-13 shooting in Game 1 of the Warriors’ series against the Denver Nuggets, Poole was back at it Monday night.

The 22-year-old guard scored 29 points on 10-of-16 shooting while dishing out a team-high eight assists. Poole was a highlight-reel waiting to happen in a blowout 126-106 Warriors win.

After seeing that, let’s refresh what Steve Kerr said about his young guard. “Some of the flurries reminded me of his teammate that came off the bench.” Of course, the three-time champion head coach is talking about his three-time NBA champion point guard in that of one Stephen Curry.

A game that saw Poole display the same dominance as his older teammate also included Curry coming off the bench for a game-high 34 points on 17 shots in just 23 minutes of action. It was Curry’s second game back after missing the final 12 regular-season outings with a foot injury. While still on a minutes restriction, Curry didn’t look anything like the rusty player he was to open Game 1.

Related: Jordan Poole and breakout stars of the 2022 NBA Playoffs

In addition to Poole and Thompson going off, another Splash Bro. in that of Klay Thompson went for 21 points of his own as Golden State took a commanding 2-0 series lead against the overmatched Nuggets.

The three combined for 84 points on 60% shooting. They were a combined plus-52. Moreover, the trio being on the court at the same time has proven to be an unstoppable force. Add in Andrew Wiggins and Draymod Green, and the level of dominance is just awe-inspiring.

Dude. A 204.3 offensive rating. Two hundred and four point three. That’s in just 11 minutes with Curry still getting his sea legs under him.

Speaking of Curry again, he’s the first player in NBA Playoff history to drop 30 points in as little as 23 minutes of action. Again, that’s a thing.

Sure the Nuggets are facing an uphill climb with Jamal Murray and Michael Porter Jr. still sidelined to injury. Reigning NBA MVP Nikola Jokic simply can’t do it by himself. That’s been apparent in two games. But the trio of Poole, Curry and Thompson simply looks unstoppable.

Jordan Poole has been darn good for a while

For those who follow the NBA a bit more closely, Poole’s performance during the early stages of the postseason shouldn’t be seen as a huge surprise. Dude has been balling out big time over the past couple months.

From March 3 to April 3, Poole scored 20-plus points in all 17 games. He was a consistent force. At times, he was a dominant force.

Now that Curry is back in the mix and Thompson looks to be 100% after missing two full seasons to injury, Poole’s performanace has been magnified even more. He looks every bit the part of a superstar and has for the past six weeks. 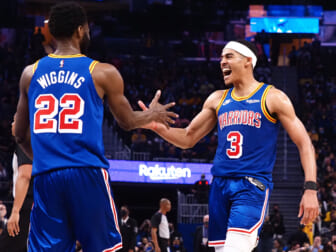 It was a theme on the TNT postgame show with the likes of Charles Barkley, Kenny Smith and Shaquille O’Neal arguing over the frustration we saw from Denver inside San Francisco’s Chase Center Monday night.

After getting ejected in Game 1, former Warriors center DeMarcus Cousins got into it with teammate Will Barton. It came in the third quarter with Denver mired in a meltdown of epic proportions and the Warriors on one of those flurries that defined their dynastic run last decade.

“No excuses. They’ve been a better team the last two games. We’ve got to figure it out cause getting swept again? Not a good look for nobody. And it’s embarrassing.”

When asked about the dust up, Nuggets head coach Michael Malone stated the obvious.

“If we’re fragmented, if we’re breaking off into groups or individuals, then we have zero chance of winning a game in this series,” Malone told reporters.

Later in the second half, Jokic was ejected after receiving his second technical of the game. The NBA MVP finalist had five fouls at the time and the game was out of hand. However, it was clear that Jordan Poole had frustrated him throughout Game 2. That included an eye-opening four-point play on the part of the guard.

Even if Golden State does advance past Denver in easy fashion, it does not guarantee a deep playoff run. It could end up facing the second-best regular-season team in the Western Conference, the Memphis Grizzlies, in the conference semifinals. The Warriors could also take on an up-and-coming Minnesota Timberwolves squad that took the regular season series.

With that said, the emergence of Jordan Poole from bottom-end rotation player to a true superstar has this team looking nearly unstoppable. And if he keeps it up, we could be witnessing the biggest story of the 2022 NBA Playoffs and the Warriors’ return to the NBA’s mountaintop.