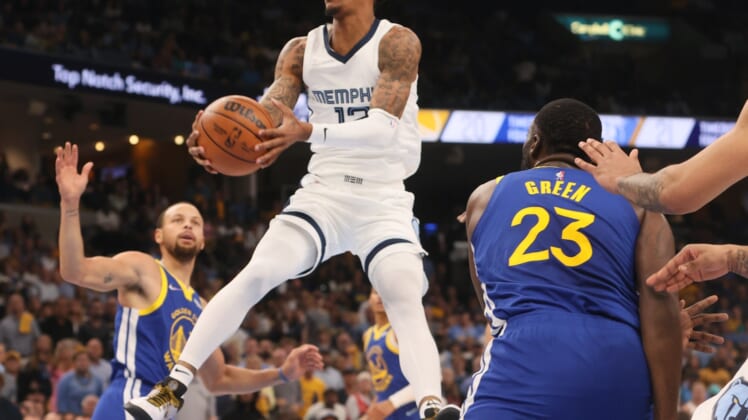 Jordan Poole scored 31 points on 12-for-20 shooting, Stephen Curry finished with 24 points, and the visiting Golden State Warriors held on for a 117-116 win over the Memphis Grizzlies on Sunday afternoon in Game 1 of their Western Conference semifinals series.

Poole and Curry drained five 3-pointers apiece as the Warriors recovered from a double-digit deficit in the first half as well as the surprise ejection of veteran forward Draymond Green. Andrew Wiggins finished with 17 points, and Klay Thompson scored 15 despite making only six of 19 shots from the field.

The teams will meet for Game 2 on Tuesday night.

Neither team led by more than four points during the final five minutes, which featured four ties and two lead changes.

Golden State’s Gary Payton II made a layup to even the score at 114-114 with 1:35 remaining. Memphis quickly bounced back with an alley-oop dunk by Clarke that made it 116-114 in favor of the Grizzlies with 1:16 to go.

Thompson put Golden State on top for good on a 3-pointer with 36.6 seconds remaining.

Neither team scored the rest of the way. Thompson missed a pair of free throws that could have cushioned the Warriors’ lead, and Morant missed a driving scoop layup in the waning moments that could have won the game.

Green was ejected with 1:18 remaining in the first half for a flagrant-2 foul against Brandon Clarke. Replays showed that Green made contact with Clarke’s head while swiping down with his arm, and he grabbed Clarke’s collar during the process.

After the flagrant-2 ruling, Green ran around the court and waved his hands at the opposing crowd as boos rained down upon him. He finished with six points, four rebounds and three assists in 17 minutes.

The Warriors finished the third quarter with a 91-90 advantage.

Golden State trailed 66-61 when Curry went off for seven consecutive points to put the Warriors on top 68-66. Curry drained a pair of step-back jump shots and a 3-pointer as Memphis battled to keep pace.