DeVonta Smith is not tempering expectations at all as he enters the NFL with former Alabama teammate Jalen Hurts on the Philadelphia Eagles.

Philadelphia Eagles rookie wide receiver DeVonta Smith is fresh off winning the Heisman Trophy and a national championship at Alabama, and is talking a big game ahead of his first NFL season.

Reuniting with his former Crimson Tide quarterback in Jalen Hurts, Smith believes they will prove to be the NFL’s best young QB-receiver combo, per ESPN.com’s Tim McManus:

Smith has every reason to be confident after putting up the senior campaign he did in Tuscaloosa:

However, there is reason to be a little concerned about whether or not Smith and Hurts can recapture some of the magic they apparently had at Alabama.

Let’s put some of the concerns about Smith and Hurts succeeding in the pros on the back burner for a minute. It’s important to flesh out just how much time they shared together in college, and the quality of said time.

No doubt, the pair grew close as teammates, but in terms of connecting in the passing game, there wasn’t as much opportunity for that during the years they were together in game situations.

Multiple future first-round receivers in Jerry Jeudy and Henry Ruggs III were ahead of Smith in experience. Jaylen Waddle went even higher (No. 6) than Smith did (10th overall) in the 2021 NFL Draft.

The last year Hurts was the full-time starter with the Crimson Tide was 2017, and in 2018 when Tua Tagovailoa was running the show, Smith finished behind all three of the aforementioned wideouts in receiving yards.

Hurts then transferred to Oklahoma for the 2019 season, just as Smith’s career began to really take off. 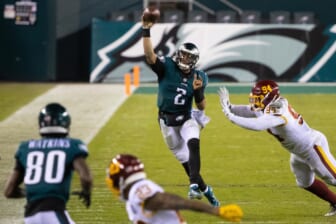 The reason it’s important to establish all that is because, first of all, Waddle and Tagovailoa are now playing together with the Miami Dolphins. They probably have more innate chemistry than Smith and Hurts, and definitely more live game reps.

Oh, and the Cincinnati Bengals drafted Ja’Marr Chase fifth overall in this year’s draft, reuniting him with his LSU QB Joe Burrow. When they last played together in 2019, Chase had 84 catches for 1,780 yards and 20 touchdowns.

Smith’s apex in college came with Tagovailoa and New England Patriots first-round pick Mac Jones throwing him the rock. It wasn’t until after Hurts left Alabama that he really got to show the strides he made as a passer.

Credit Hurts for working at his craft to improve as a passer as he approached the NFL. That said, no one is confusing him with Tagovailoa or Jones as pure throwers. At least to this point, Hurts isn’t in their class.

Waddle’s elite speed and Chase’s phenomenal all-around game can help offset any growing pains in the NFL. What if Smith’s sub-170-pound frame can’t hold up to the pounding he’ll take?

In the opinion of yours truly, Smith is going to be a baller, but that’s still a legitimate concern, as is the fact that he’s playing with an inferior thrower to Tagovailoa and Burrow in Hurts.

Then again, with the Eagles returning a much healthier veteran offensive line in 2021 and Hurts actually having a legitimate separator, polished route-runner and prolific producer in Smith as his go-to guy, maybe the pair can shock the NFL world and indeed emerge as the best young passing game combination.

Smith and Hurts are accustomed to being doubted. They’ll have healthy chips on their shoulders as they try to restore the Eagles to glory, which may be the juice they need to back up Smith’s bold statement. 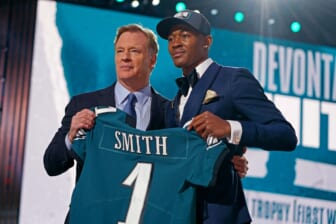