Months after Houston Texans quarterback Deshaun Watson demanded a trade, the NFL star reported for training camp on Sunday in preparation for the upcoming 2021 season.

Watson requested a trade this spring, citing concerns with the Texans’ organization tied to issues with the front office and team owner Cal McNair. Just as NFL rumors surfaced regarding the specific nature of the issues in Houston, the first of 22 sexual misconduct allegations came out against Watson.

Facing uncertainty surrounding his availability for the 2021 season, many wondered if Watson would report to training camp this week. Facing the possibility of a $50,000 fine for each day missed, that question is now answered.

NFL Network’s Ian Rapoport reports that Watson is reporting for training camp Sunday and will undergo testing before practices begin. However, the 25-year-old NFL star isn’t budging off his trade demand.

Will Deshaun Watson be traded?

While Watson hasn’t changed his stance, the Texans are in a very different place than a few months ago. When the face of the franchise first asked for a trade, Houston refused to discuss deals. The organization believed it could fix things, even as the relationship deteriorated further. But the front office feels differently as of late.

ESPN’s Jeremy Fowler confirmed earlier reports that the Texans started preparing to move on from Watson in May and there is a strong sense around the league that he has played his final regular-season snap for this franchise.

While some of the originally interested teams have backed off, the Miami Dolphins, Philadelphia Eagles and Denver Broncos are still open to acquiring Watson. 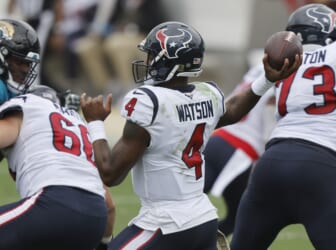 The Texans would preserve to see Watson’s legal situation resolved before moving him, increasing his trade value from the low point it’s at now. But with no settlement imminent for the 22 civil suits and concern for a potential multi-game suspension, it wouldn’t be a surprise if a deal is made within the next few months.